ON AN OVERCAST Tuesday in downtown Los Angeles, Carmelo Anthony strides along a sidewalk in sneakers, black sweatpants and a black hoodie pulled over his head. He’s heading toward the Ritz-Carlton hotel, where the Portland Trail Blazers are staying, after making the short trek from shootaround at nearby Staples Center.

His teammates have already departed the arena by bus, but Anthony is slow to leave following a 12-minute media session with a small group of reporters. One day earlier, he was named the Western Conference Player of the Week, his first such honor since 2014.

Winning that award — after averaging 22.3 points and 7.7 rebounds and helping lead the Blazers to three straight wins — clearly mattered. “It’s deeper than basketball,” he said. Then Anthony went for a walk.

Walks are a thing for Carmelo Anthony. He recalls the habit starting as long ago as his 2012-13 season with the New York Knicks. Around 2 a.m. one night, when he was facing the Celtics in Boston during a first-round playoff series, Anthony’s mind was racing, and he couldn’t sleep.

“We’ve got to take a walk,” he said to his security guard.

Anthony says he’s always liked walking, always liked being outside. He enjoyed the late-night strolls around major cities, despite being world famous and 6-foot-8.

“People look at me crazy, like what are you doing?“

Sometimes he’s spotted, sometimes not. It depends on the time and place. But in the past year, while Anthony wrestled with his future, his walks became something more. 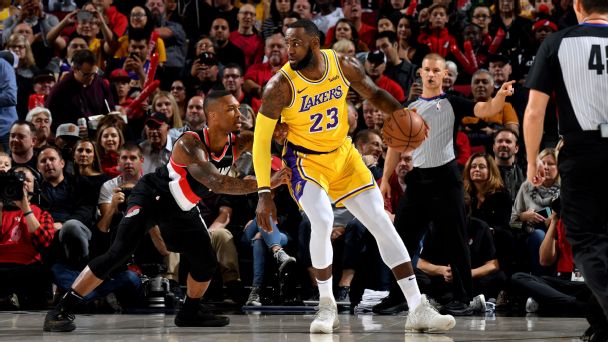 The NBA is back! Tune in here.

“The physical part was going to take care of itself. I was going to stay somewhat fit. I was going to be in the gym. But I think [the walks were] to get my mind right, to get my spirituality and my emotions right, just to get all that stuff right and come back with a clear mind.”

Just over a year removed from an unceremonious exile by the Houston Rockets, Carmelo Anthony is back. The 10-time All-Star — after starting the season without a roster spot for the first time in his career — is working to find his rhythm on a Portland team that is looking like just the right fit.

On this day in Los Angeles, with a security guard beside him, Anthony is spotted near the Ritz. A man crossing the street detours, taking a straight line diagonally across an intersection toward Anthony. He greets him with energy and excitement. From afar, it’s easy to see Anthony repeatedly telling the man: “Thank you.”

Then Anthony resumes his stride.

READ: Inside the music and mind of Damian Lillard

AFTER HE MAKES half his shots and tallies 20 points on Dec. 4 against the Sacramento Kings, after his team wins its fourth game in its last five, Anthony is the last player to leave Portland’s home locker room.

His stall sits next to CJ McCollum‘s and across from Damian Lillard‘s. Lillard sits next to Anthony on bus rides and invited him into his home for Thanksgiving. The franchise star opened up the organization that’s built around him to embrace Anthony, an iconic player whom Lillard thought was treated unfairly during his short stint with the Houston Rockets.

To Anthony, whose contract is now fully guaranteed for this season, it’s as if Lillard has opened up the whole city of Portland. He talks of how Lillard has wanted him “to be a part of what he created.”

“You don’t take that for granted,” Anthony says.

From afar, Lillard always respected Anthony’s talent. He saw how Anthony handled himself with teammates and media, seeing some of himself in Anthony, Lillard says. When Anthony arrived, and the media scrums swelled, and fans mobbed Anthony for autographs at games, and his number 00 jersey started flying off the shelves, and the Moda Center crowd boomed his name during the starting lineup introductions, Lillard saw how Anthony didn’t make this opportunity about himself when he easily could’ve done so.

But as much as their support carries him, so too does the fact that what he has here feels real, organic, authentic.

“That’s why I’m able to go out there and do what I do and play the way that I’ve been playing as of late — because I have a clear mind and I can just play freely,” Anthony says. “I don’t have to worry about making mistakes and being pulled or just being on a string or being in a box.

“When you can just go out there and be free and play basketball and do what you do best, I think that’s where the most joy comes from.”

In Houston, Anthony appeared to be an awful fit in the Rockets’ switch-centric defense and in an offense aggressively predicated on 3-pointers, layups and free throws. But if Anthony felt restrained in Houston, he says he’s felt empowered in Portland — and that’s by design.

“I think you have to give them freedom to do what they do best,” says Blazers head coach Terry Stotts.

Stotts has run some sets for Anthony, put him in pick-and-roll action and allowed him to spot up for midrange shots.

“I try not to pigeonhole players,” Stotts says. “Melo, he’s a Hall of Fame player. He knows his game. He’s a smart player. I think it would be crazy to try and put him in a box.”

Anthony knows what’s happening with the Blazers might not happen with every other team. He calls the fit in Portland “perfect.” It’s the confluence of so many things coming together — a long courtship and both sides needing one another at the same time.

“Man, when you feel wanted,” he says, “it settles a lot of things.”

Back in the bowels of the Moda Center, Anthony lingers in the hallway outside the Blazers locker room, the arena long since quieted after “Let’s go, Melo” chants had echoed hours before. He walks toward the exit, but he’s in no hurry. He’s savoring the small moments more now: being in the locker room, the team meals, joking with teammates, the camaraderie, the belonging.

MCCOLLUM HAD CROSSED paths with Anthony over the summer at various gyms across New York City. And he was struck by how good Anthony looked — how lean, agile and effective he was against younger players.

“I thought he was in better shape than I’d seen him in previous summers,” McCollum says. “And I thought he had the right mentality and mindset to still play in the NBA.”

McCollum passed along word to Blazers management, says Trail Blazers president of basketball operations, Neil Olshey, but there wasn’t a place in Portland for Anthony — at least not yet. Still, Anthony’s agent, Leon Rose of CAA, and Olshey kept in touch. Rose knew the Blazers had long coveted Anthony, trying to trade for him and sign him in free agency on multiple occasions.

Olshey still believed in Anthony. After an underwhelming, injury-filled start to the season, the spark the Blazers wanted, the inspiration — it’s there in the form of a feel-good story that reverberates throughout the organization. Olshey believes players have responded to Anthony because they know that could be them some day, maybe not far off in the future.

“That’s how quickly it happens,” Olshey says. “I think they’d like to know that someone would still believe in them.”

After Anthony dropped 25 points and eight rebounds in his first Blazers win, Olshey recalled sending Anthony a text: “As a coach and executive, I was on the wrong side of a lot of those games.”

For Todd Forcier, the Blazers’ sports performance specialist, this was a reunion. By chance or serendipity, Anthony and Forcier were on the same team 17 years ago. Back then, Anthony was a freshman forward for the Syracuse Orange, and Forcier was in his first year as the team’s strength and conditioning coach. Forcier heard Anthony was special, and he had been given a mission from then-Syracuse assistant coach Troy Weaver: “You gotta get him in shape.”

Anthony lifted with Forcier in the early mornings several days a week and stayed after practice for intense conditioning drills. After leading the Orange to a title, Anthony declared for the 2003 NBA draft. And seven years later, Forcier returned to the NBA, joining the Blazers in 2010.

As the NBA seasons ground along, Forcier tried to stop at visitors locker rooms to see players he worked with at previous stops, and he would always greet Anthony. When Anthony faced tumultuous seasons in New York, Oklahoma City and Houston, Forcier remained adamant that the narrative about Anthony was wrong.

“He is not what the media or the franchises or whomever made him out to be,” Forcier says.

Then, one November evening, Forcier’s phone buzzed. And five days later, there they were, together again in New Orleans, where forever ago, the Orange had played in the NCAA Final Four and won it all. Only now, Forcier has a different purpose, one that he says he’s honored to undertake.

“I’m here to make sure I can maximize his time,” Forcier says.

IN THE EARLY evening of Nov. 14, Anthony weaved his way toward a six-bedroom, 10-bathroom Beverly Park mansion located in one of the most exclusive communities in all of Los Angeles. It’s a prestigious, guard-gated enclave accessible through multiple checkpoints armed with 24/7 security — a private haven of billionaires and celebrities that has been dubbed LA’s richest neighborhood.

Anthony would be joined by nearly 20 executives from the finance, technology and entertainment fields — all industries that Anthony dabbled in during his NBA career, planning to make them his full-time focus once his career was over.

And, at that moment, it was over.

After a disastrous 10-game stint with the Rockets almost one year earlier, Anthony had, by this point, planned to retire from basketball following 16 NBA seasons. But as his car neared this monument to opulence, he received the news that a deal was done: The Blazers were signing the 35-year-old.

But the tenor of the evening changed, becoming a celebration of Anthony.

As soon as he arrived, he headed straight for WNBA star Candace Parker and his longtime physical therapist Fabrice Gautier. All three toasted with glasses of Dom Perignon. He sat near the center of a long table on a covered patio, and after the host gave a short speech about the dinner, Anthony and his good fortune were recognized again.

While word spread further of Anthony’s return, Parker commended Anthony for how professionally he handled himself during his sabbatical. In March of this year, Gautier visited Anthony at his Manhattan apartment and could see doubt wearing on the forward — doubt in himself, perhaps, but more so in his place in the NBA.

“Melo, you’re better than this,” they said, according to Anthony. “This is not your fault. We’re not going to let you give up.”

He still trained in New York and L.A., working on his body, trying to stay lean. But in every prior offseason, Anthony knew he’d be training for a certain team, a certain system, a role. Now, nothing awaited him.

“When you’re just getting up in the morning and have to force yourself to go to the gym,” he says, “I don’t think people understand how hard that is and how difficult that is.”

Calls came and went — more than he can remember. The season started, the game moved on and so had he. But then the Trail Blazers opportunity arrived.

“Basketball,” Anthony says, “pulled me back.”