With the NBA season more than half over, what does each team’s offense look like? Which offenses need fixing?

Modern NBA offenses are incredibly complicated. They have to be, seeing as (and don’t let any basketball boomers hear this) NBA defenses are very, very good. Teams constantly change, expand, and improve their offensive arsenals to help them overcome the competition. It can be incredibly difficult for the average viewer to attempt to analyze the hundreds of thousands of micro-actions that offenses employ over the course of an NBA season.

Thankfully, there are tools to help. Synergy uses tracking data to break scoring plays down to 11 basic forms: cuts, handoffs, isolations, plays off screens, pick-and-roll ball-handler, pick-and-roll roll-man, post-ups, spot-ups, transition plays, putbacks, and misc. Ignoring putbacks and misc plays, we can achieve a basic understanding of how each halfcourt offense is run.

Each team’s offense (through Jan. 20) is visualized below.

How to read the graphs

The height of the circle represents the team’s points per possession for the given play-type.

The size of the circle depicts the frequency with which the team uses the given play.

The color of the circle shows the team’s points per possession (PPP) vs. league average for the play. 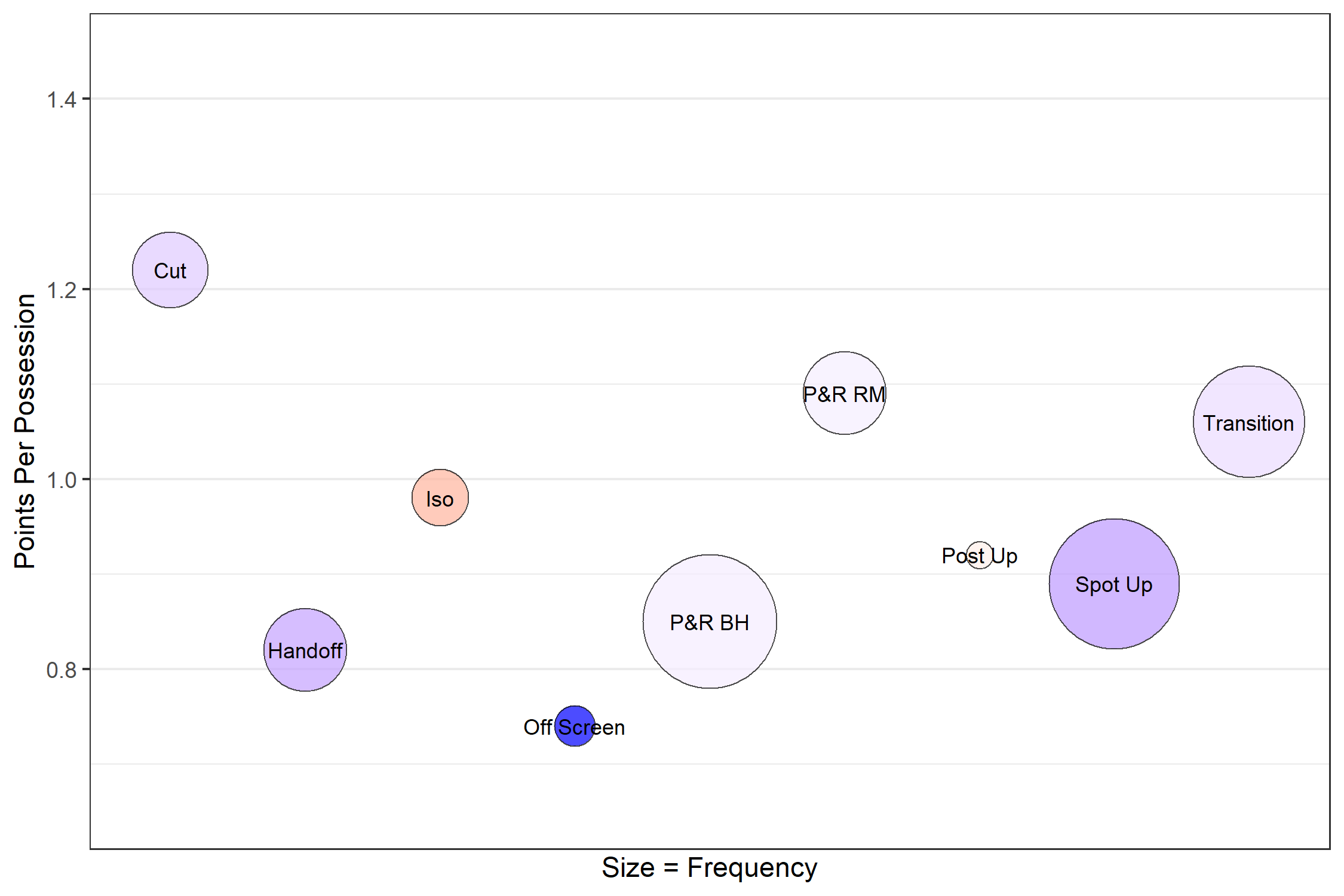 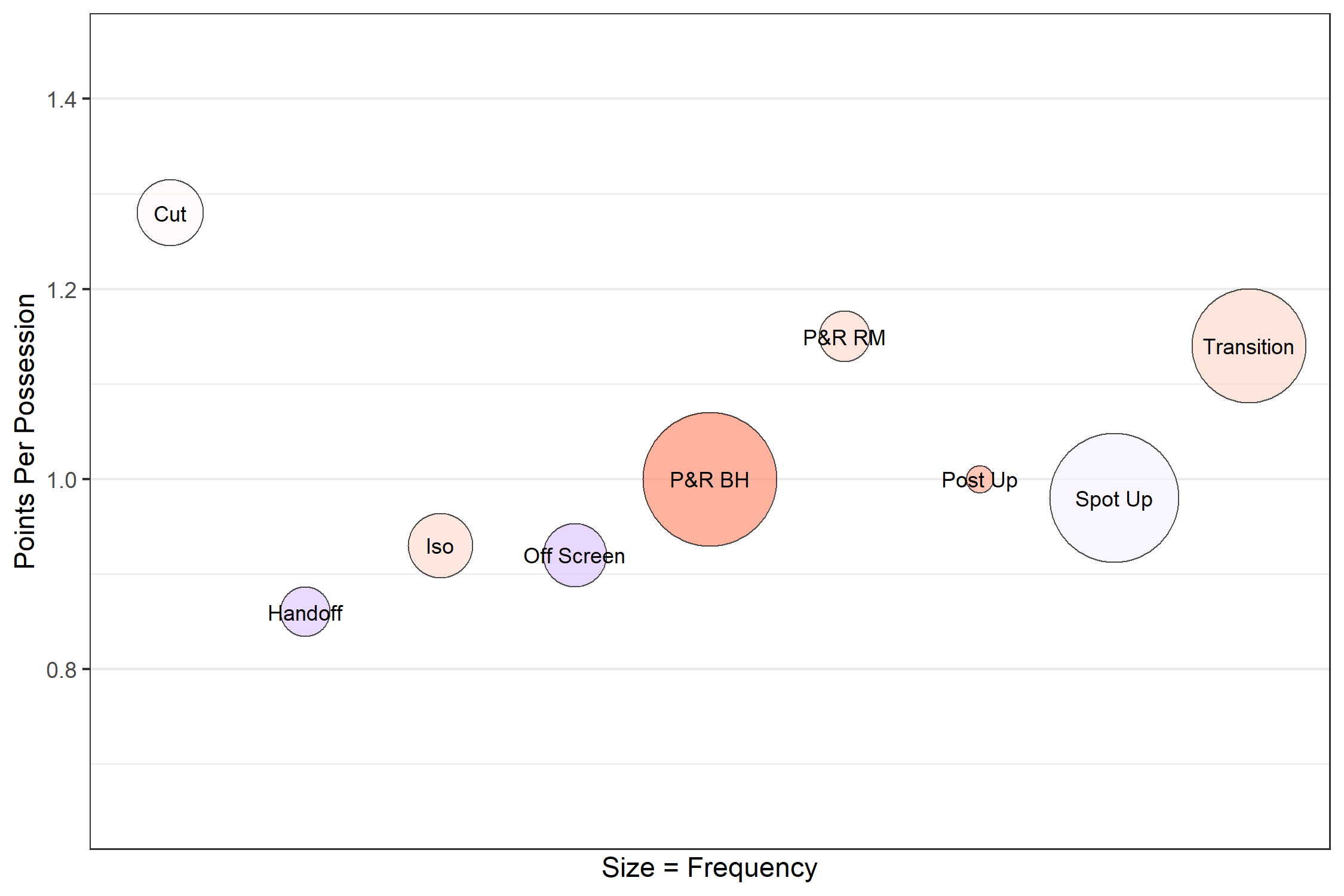 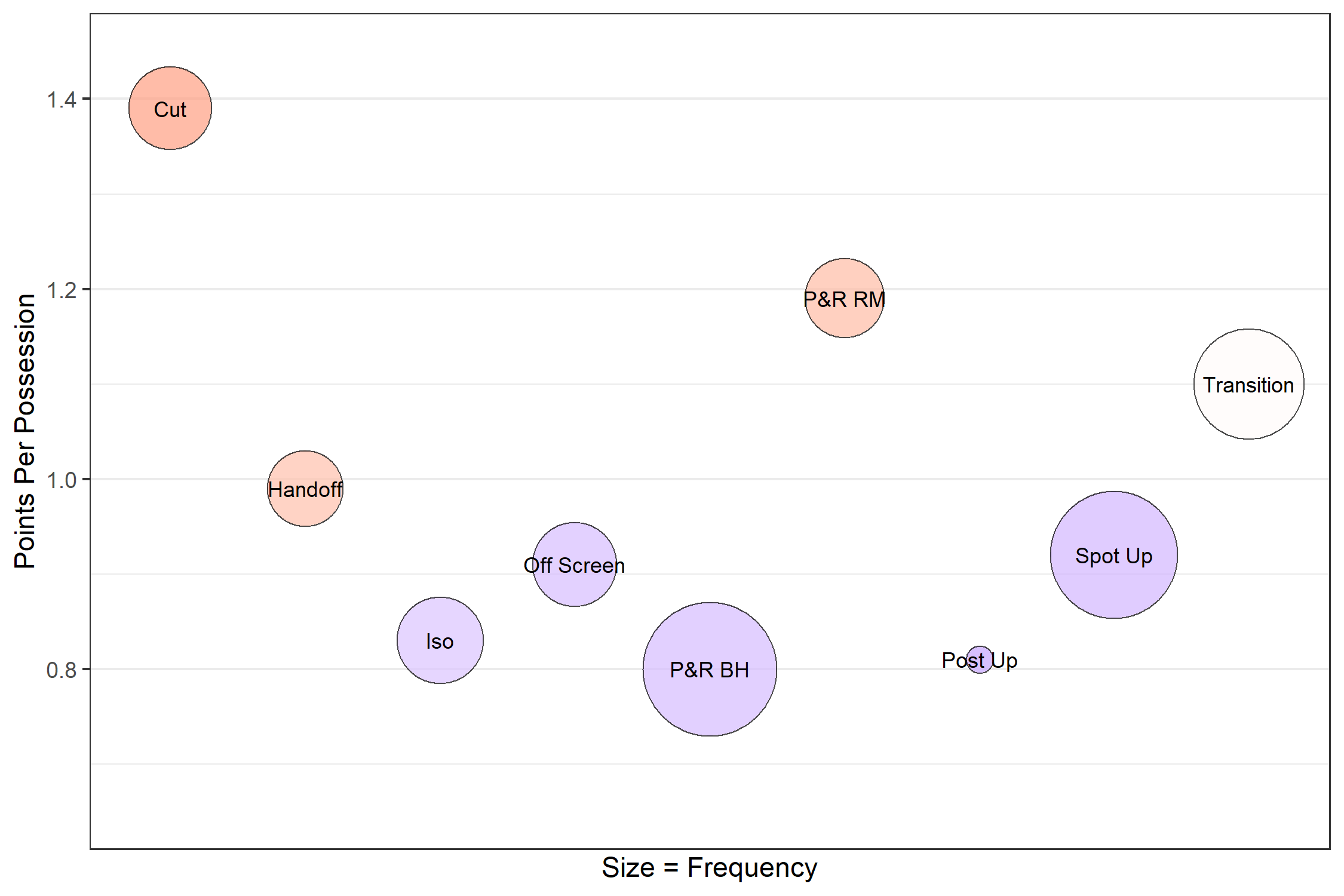 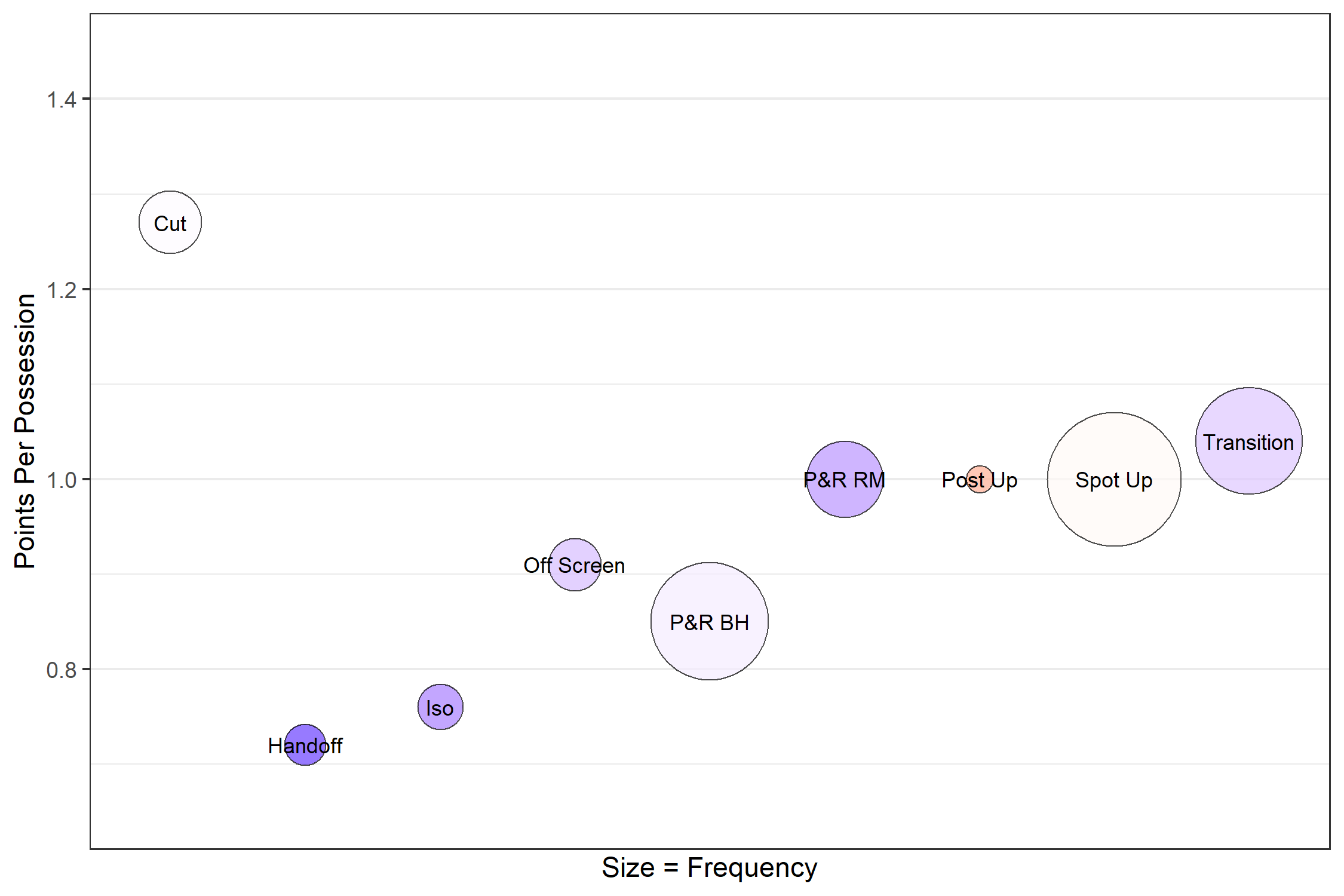 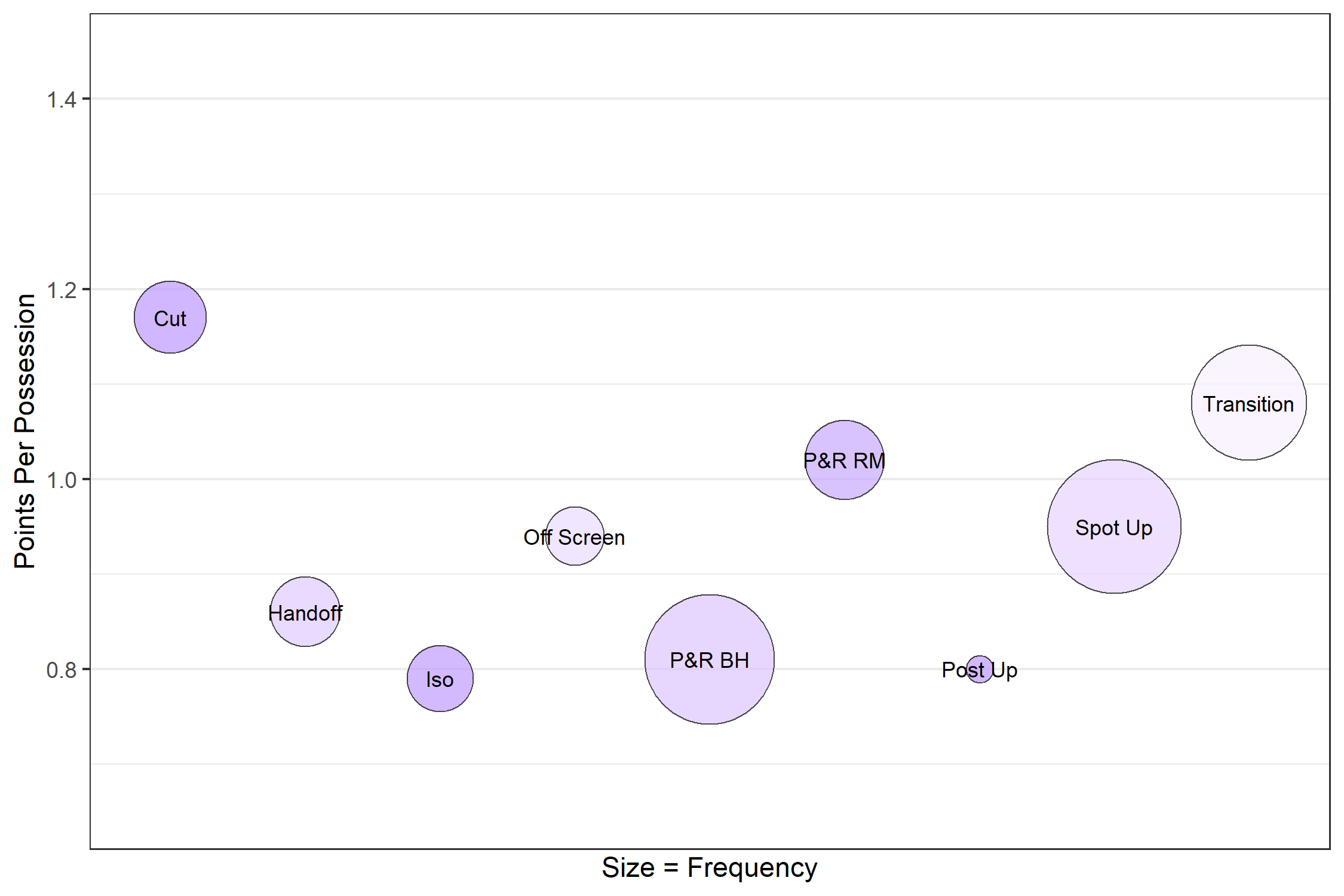 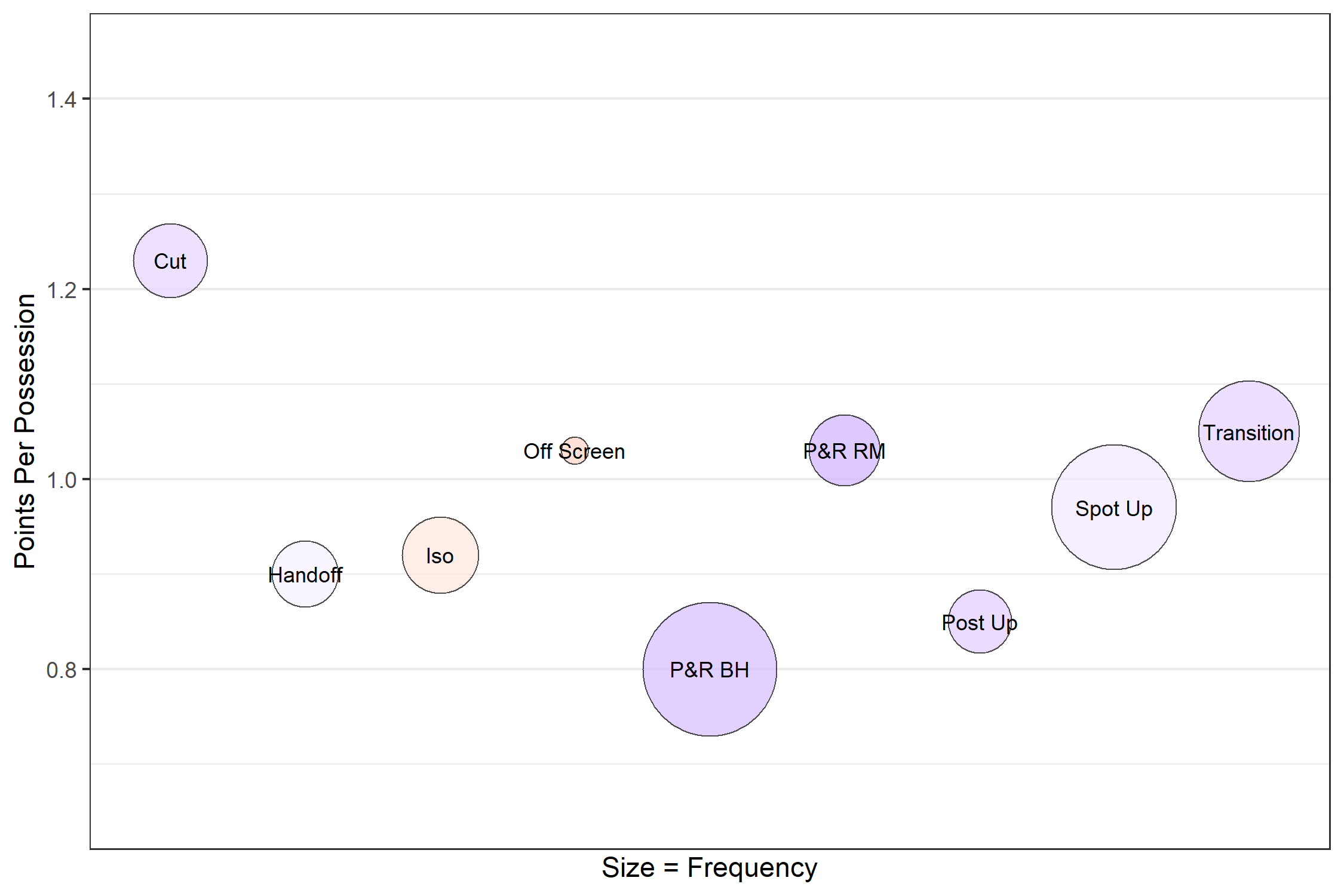 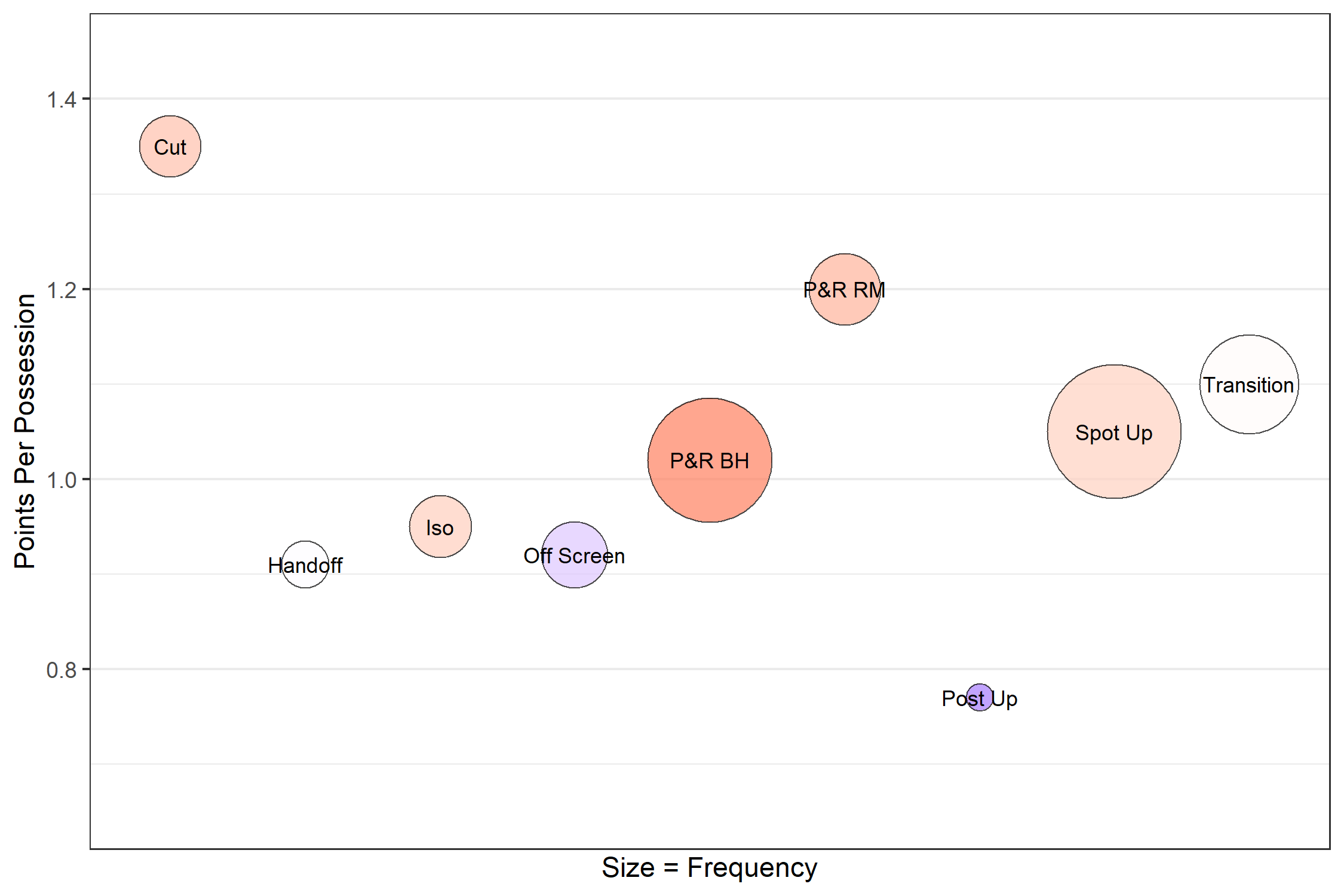 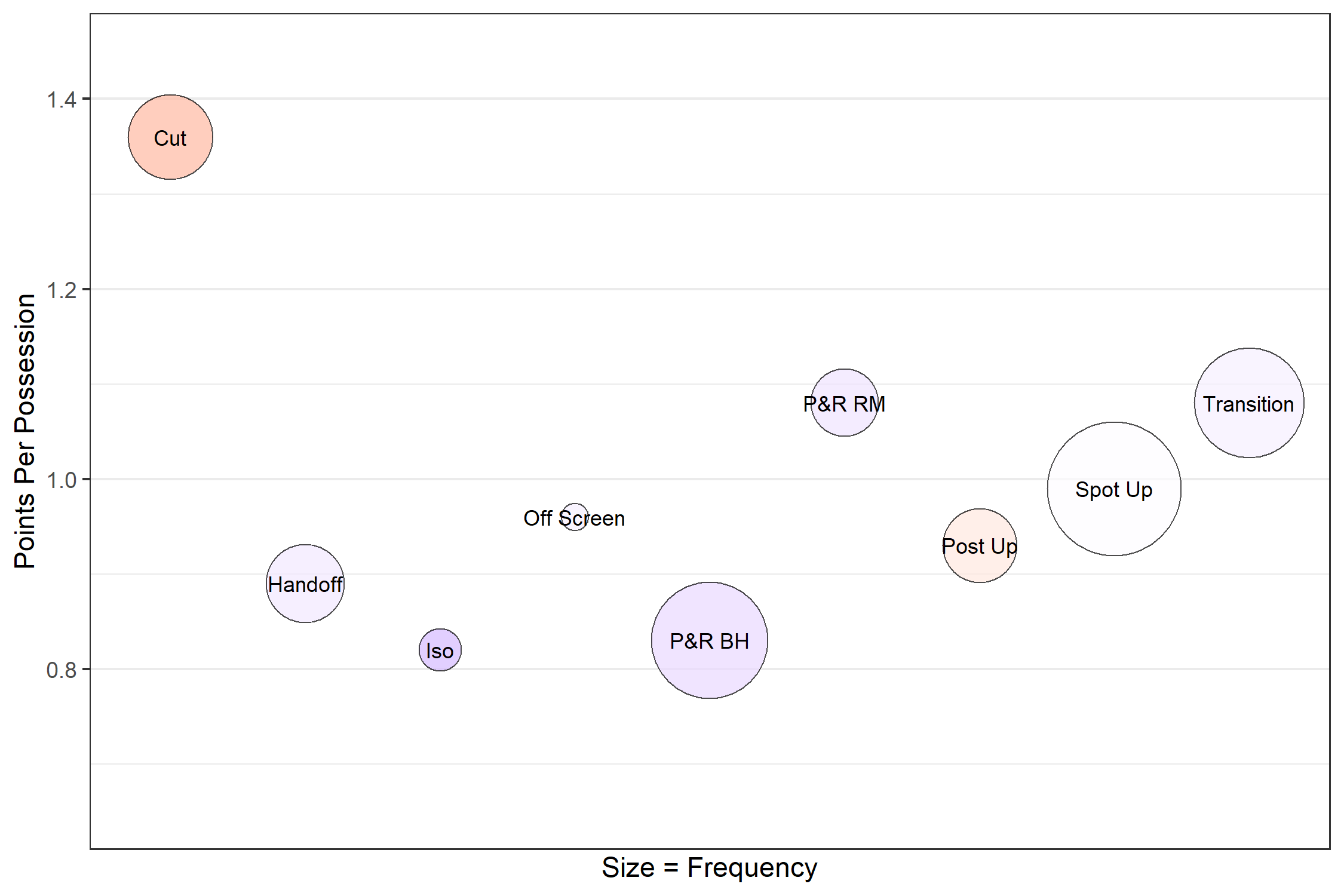 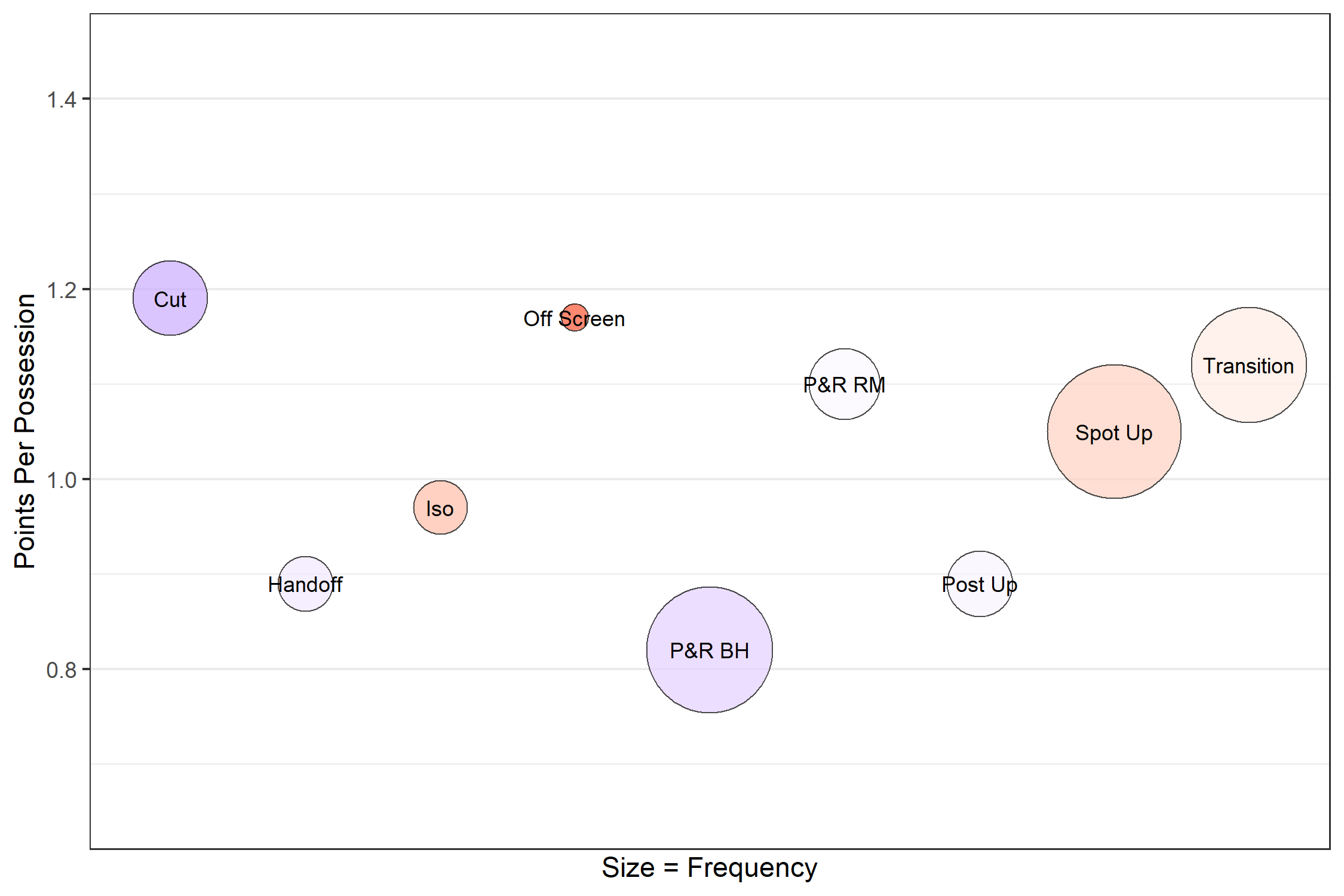 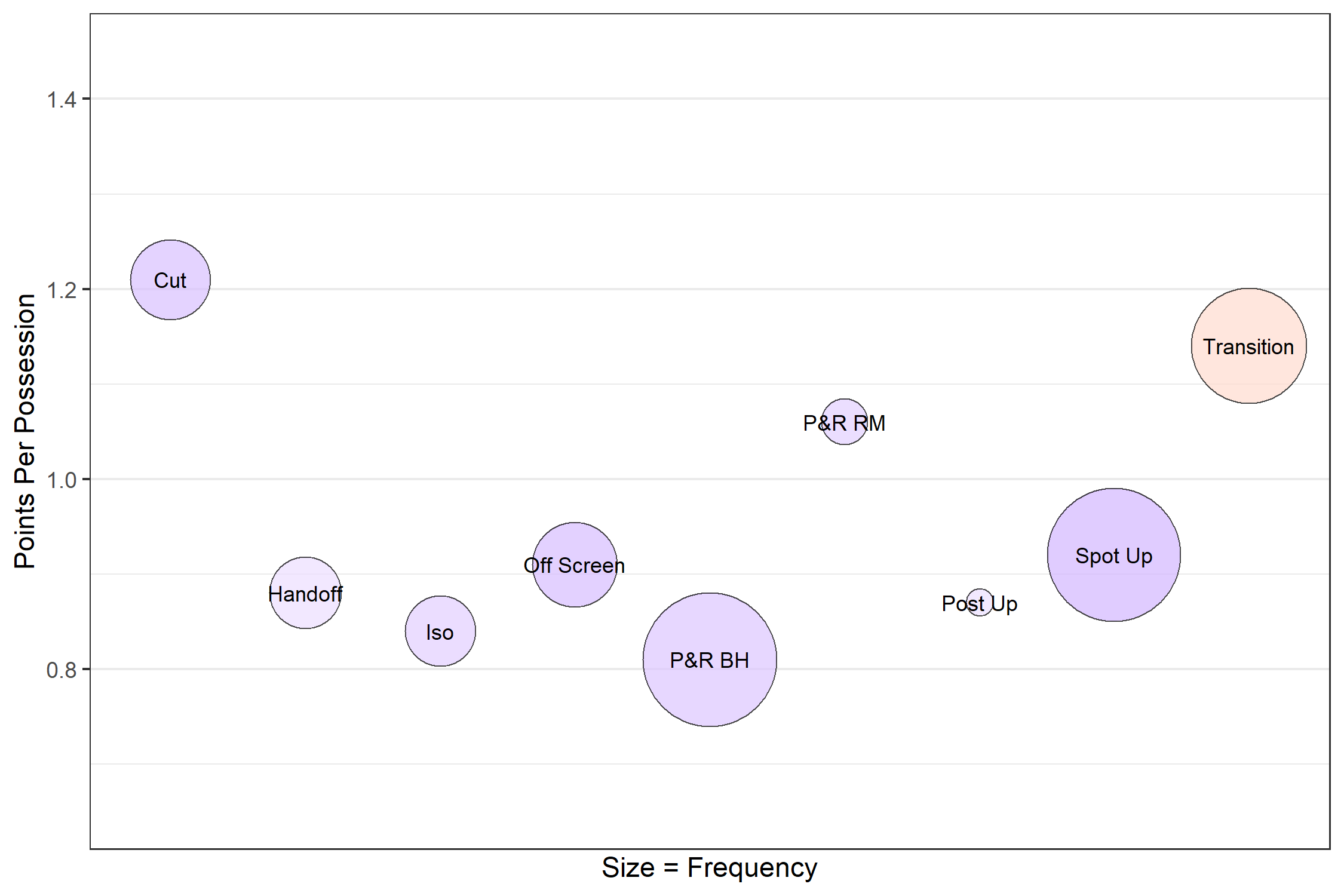 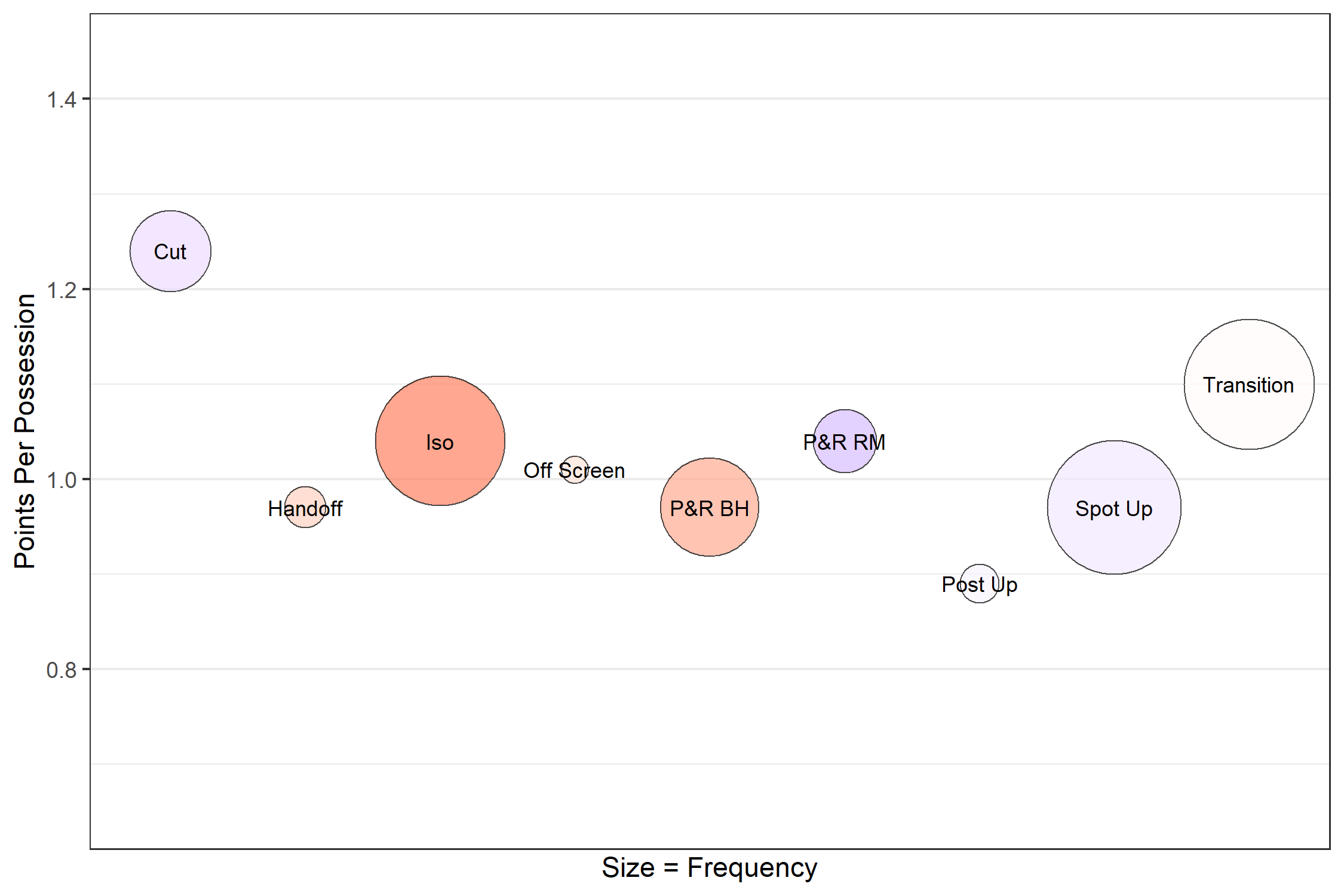 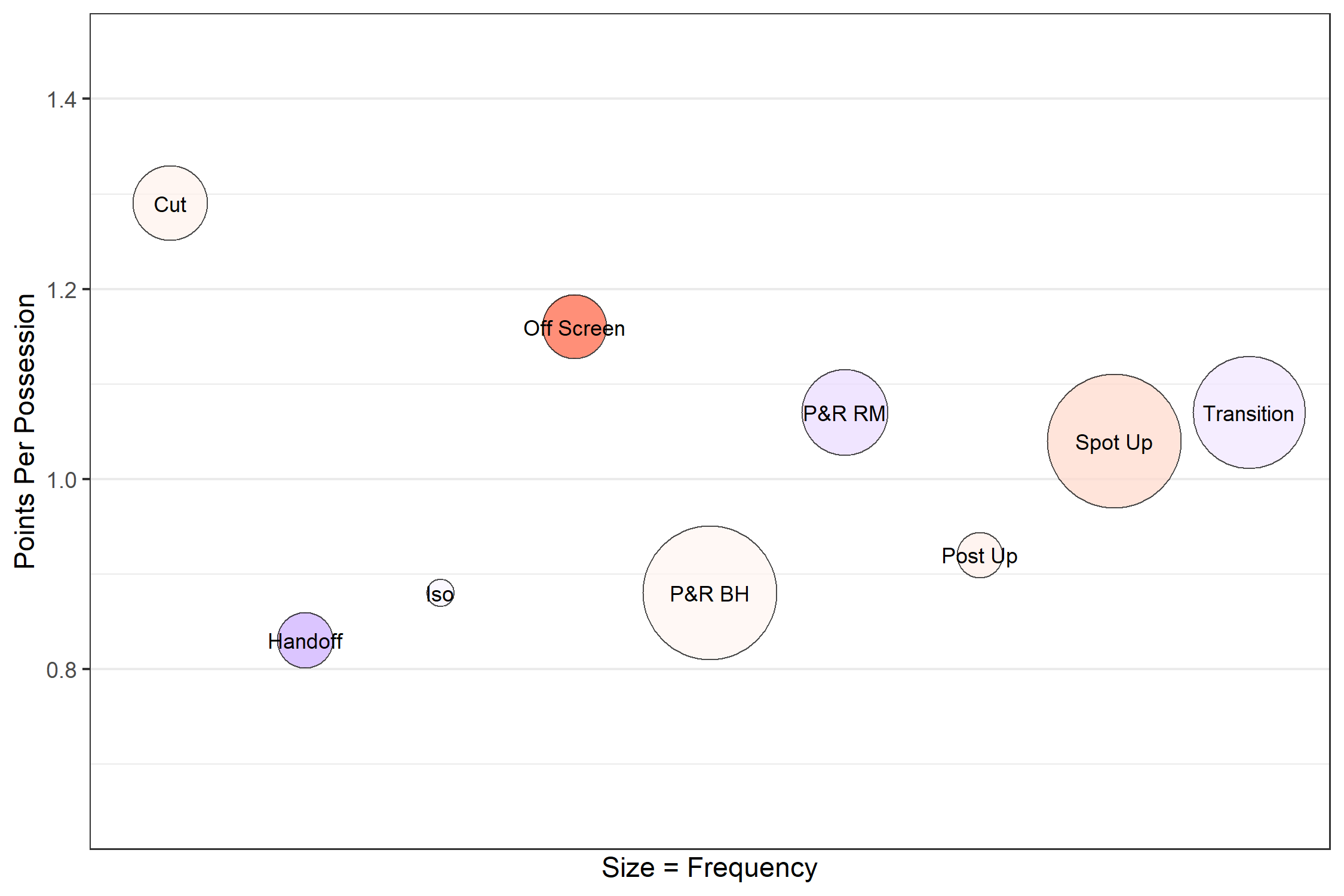 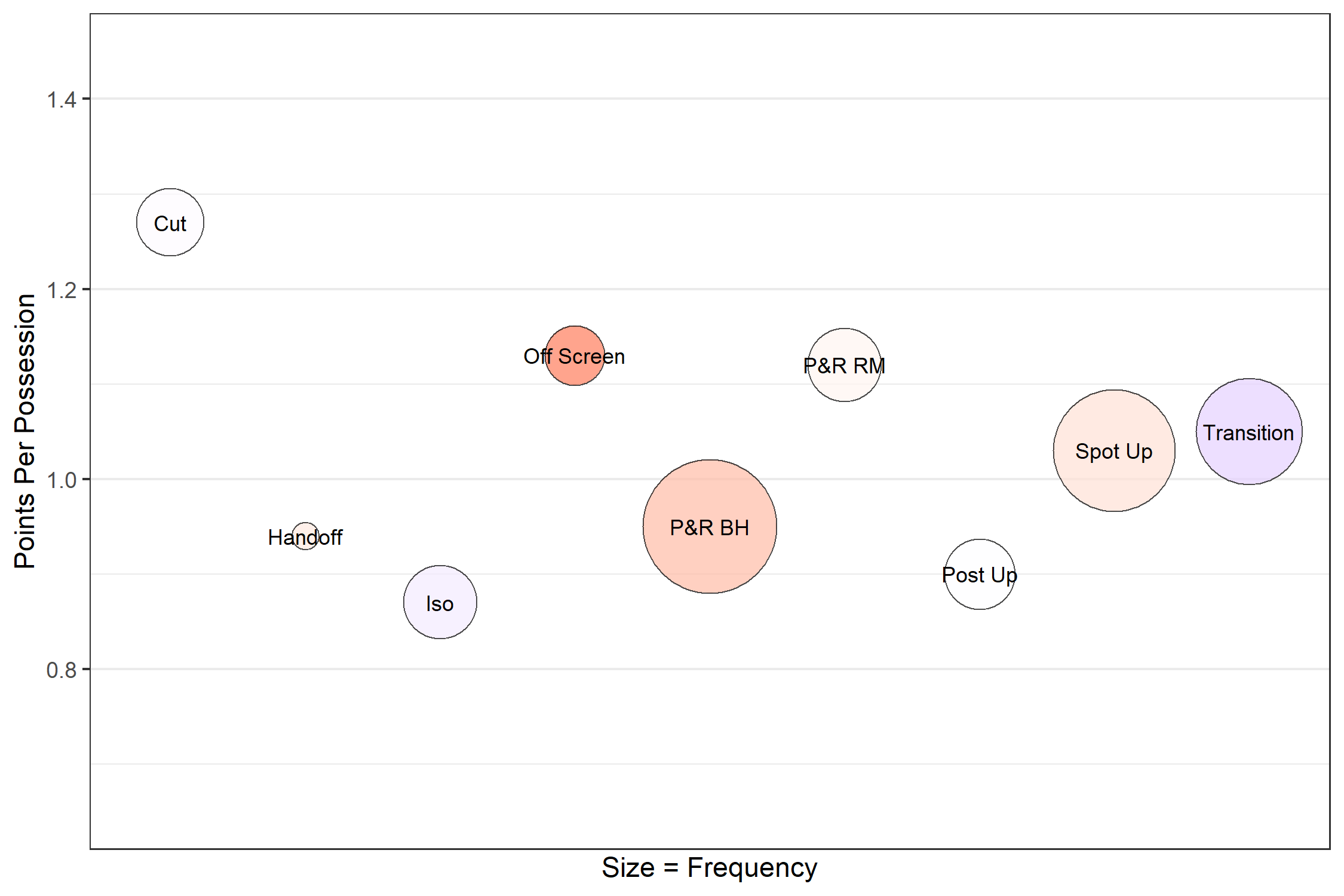 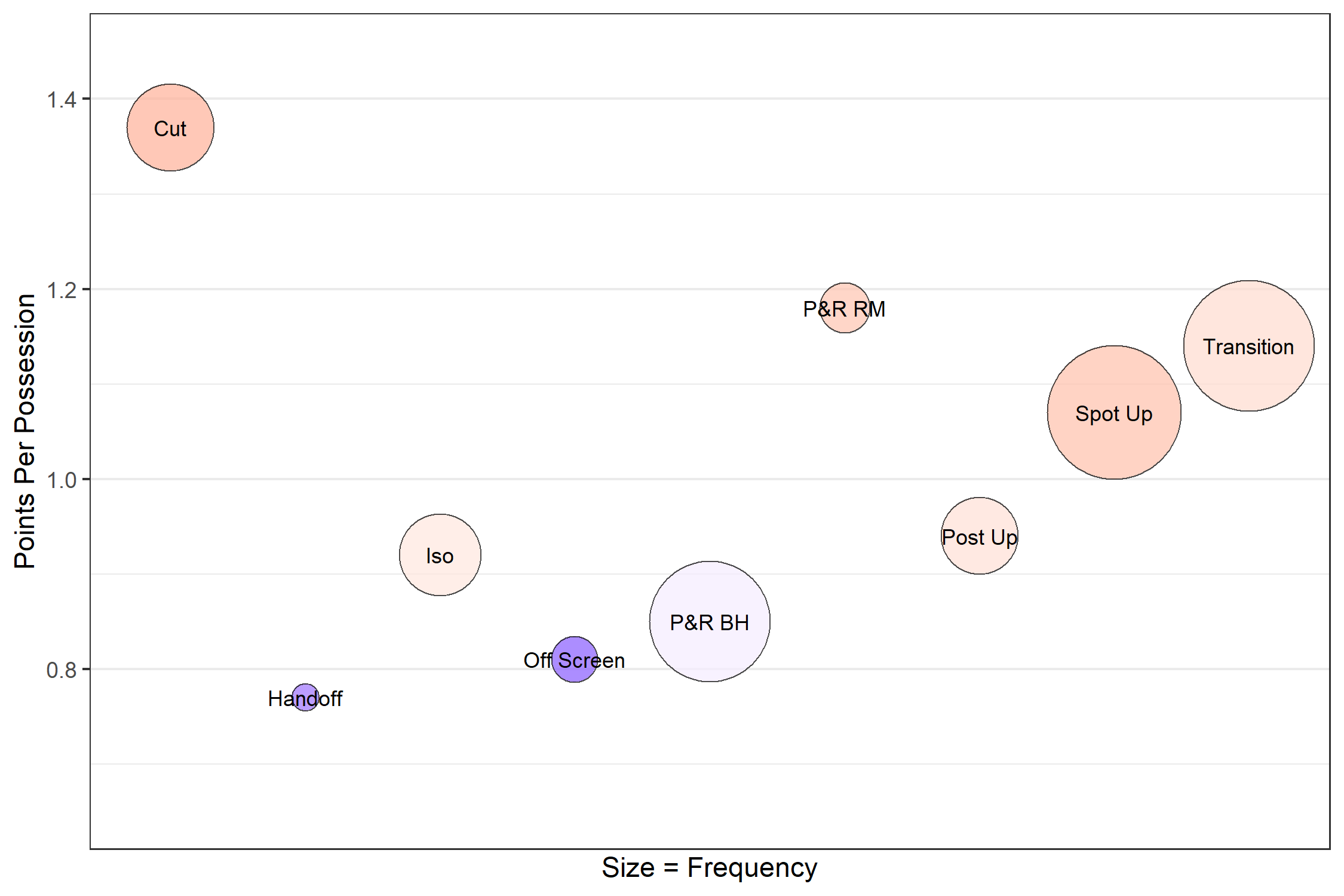 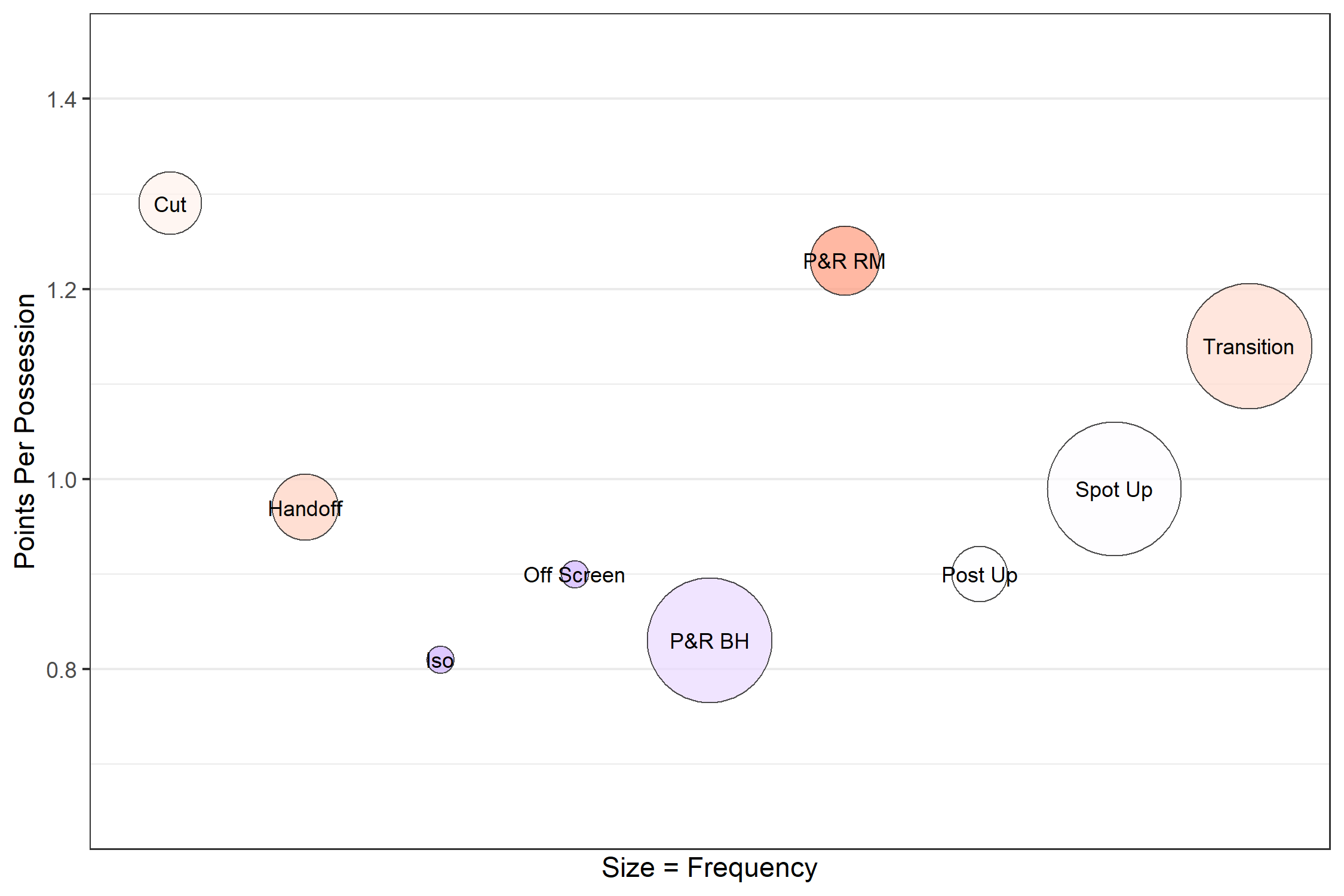 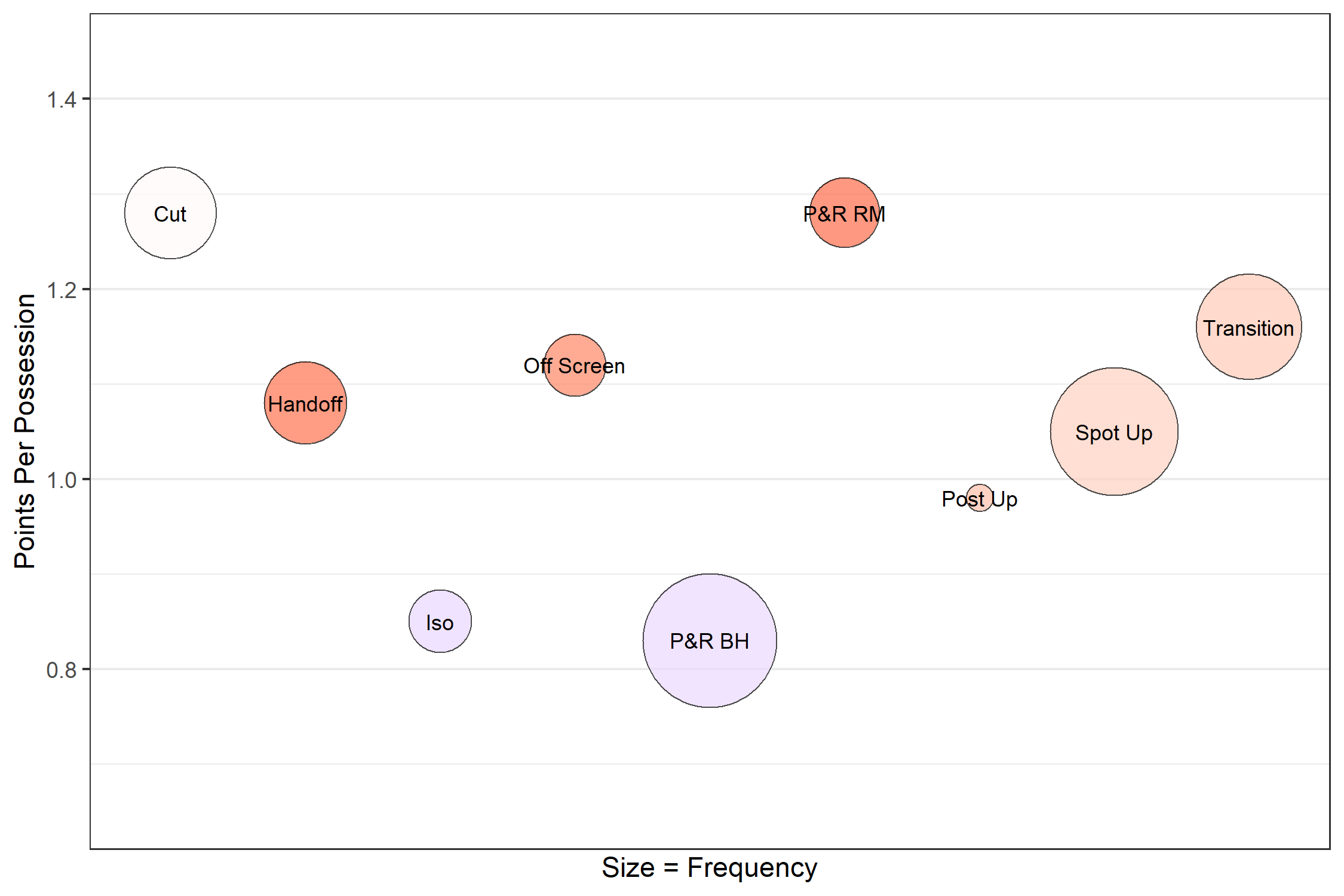 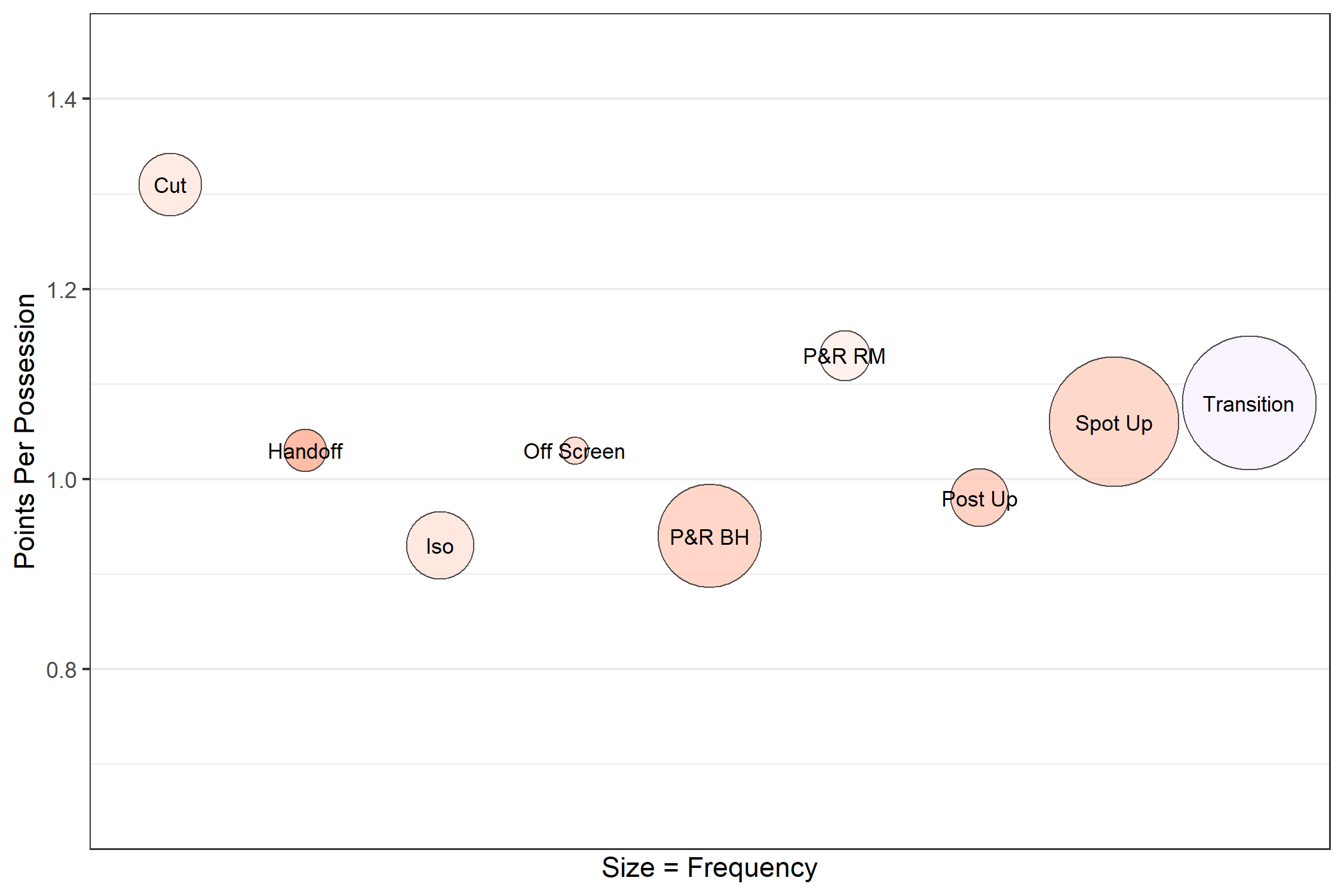 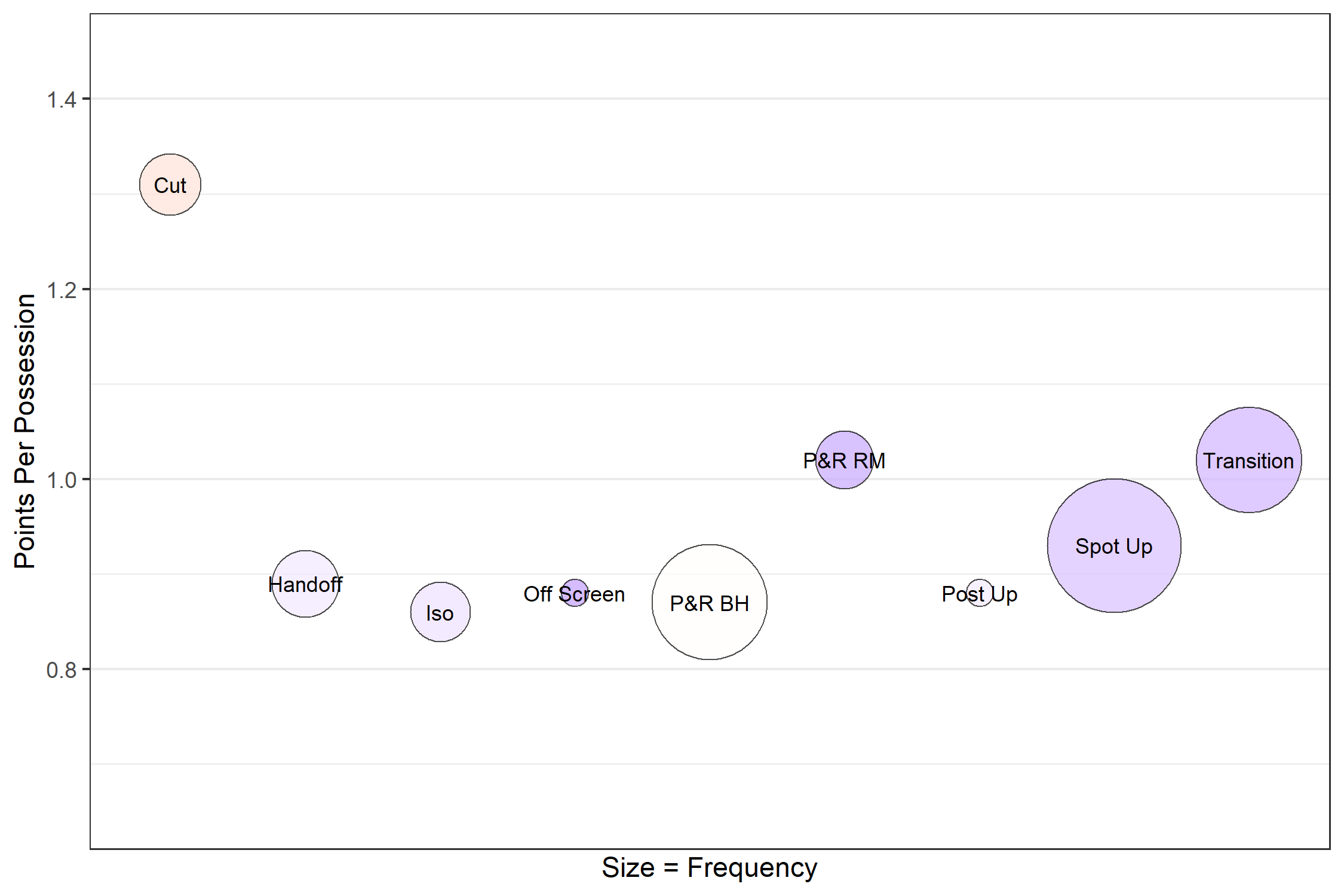 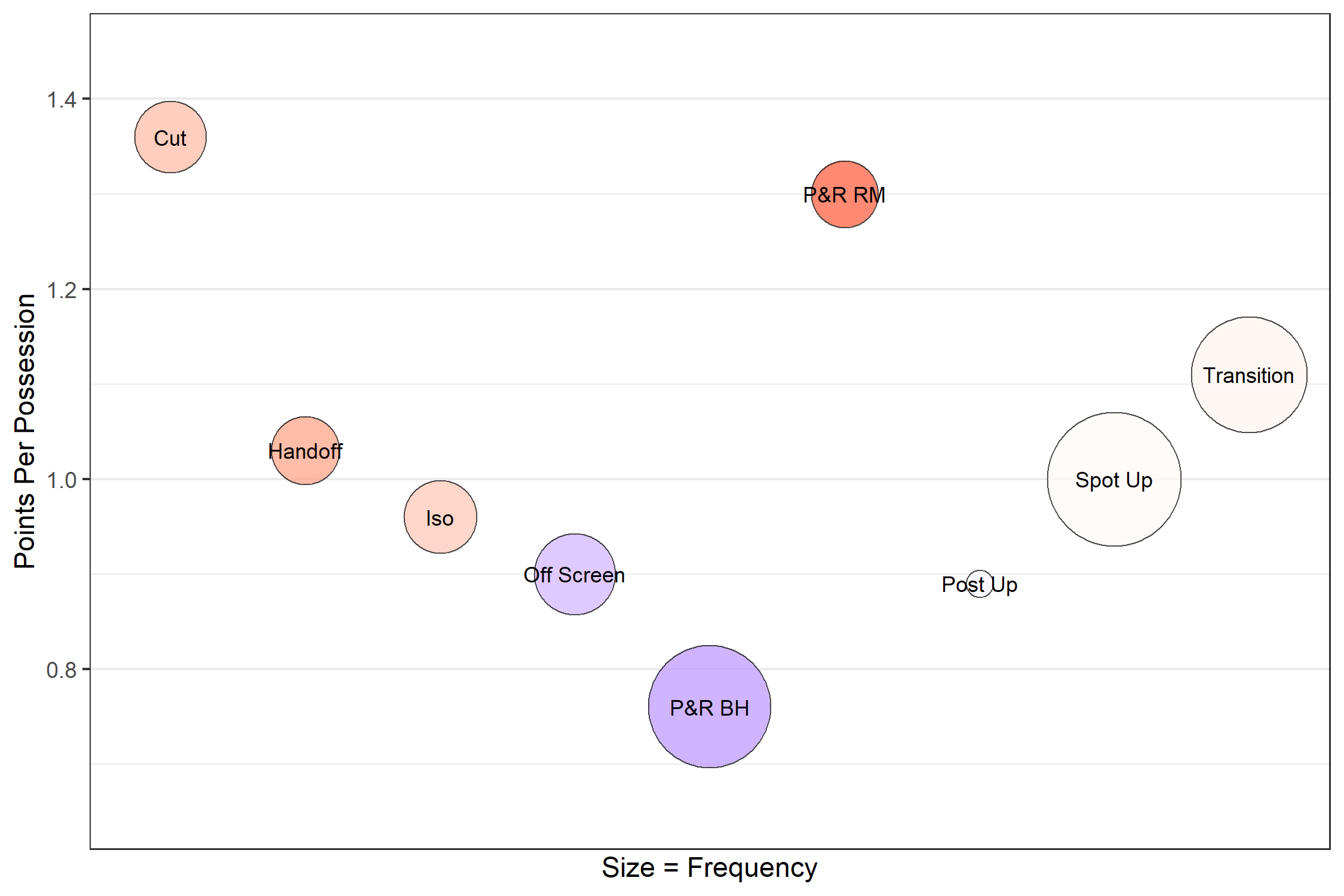 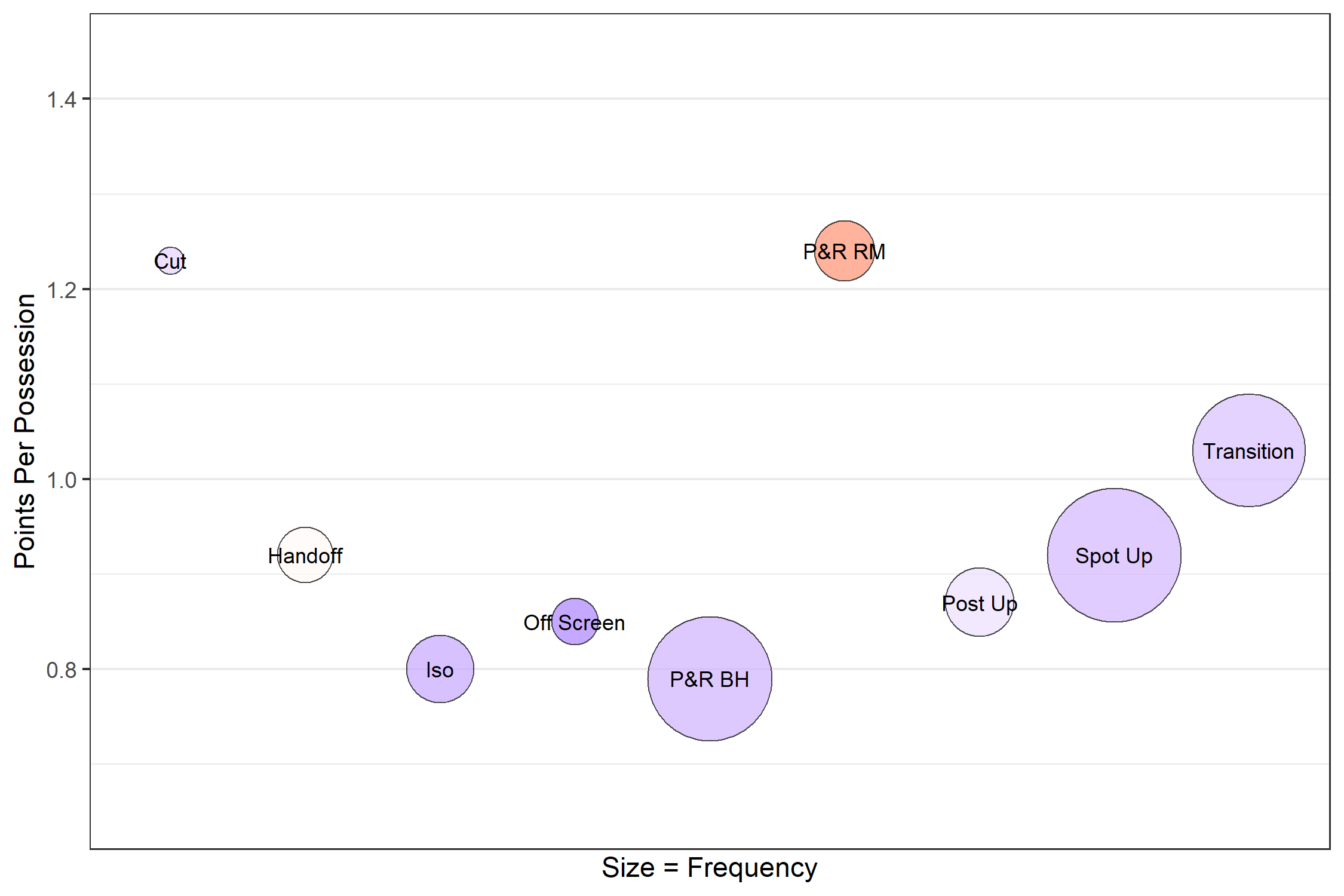 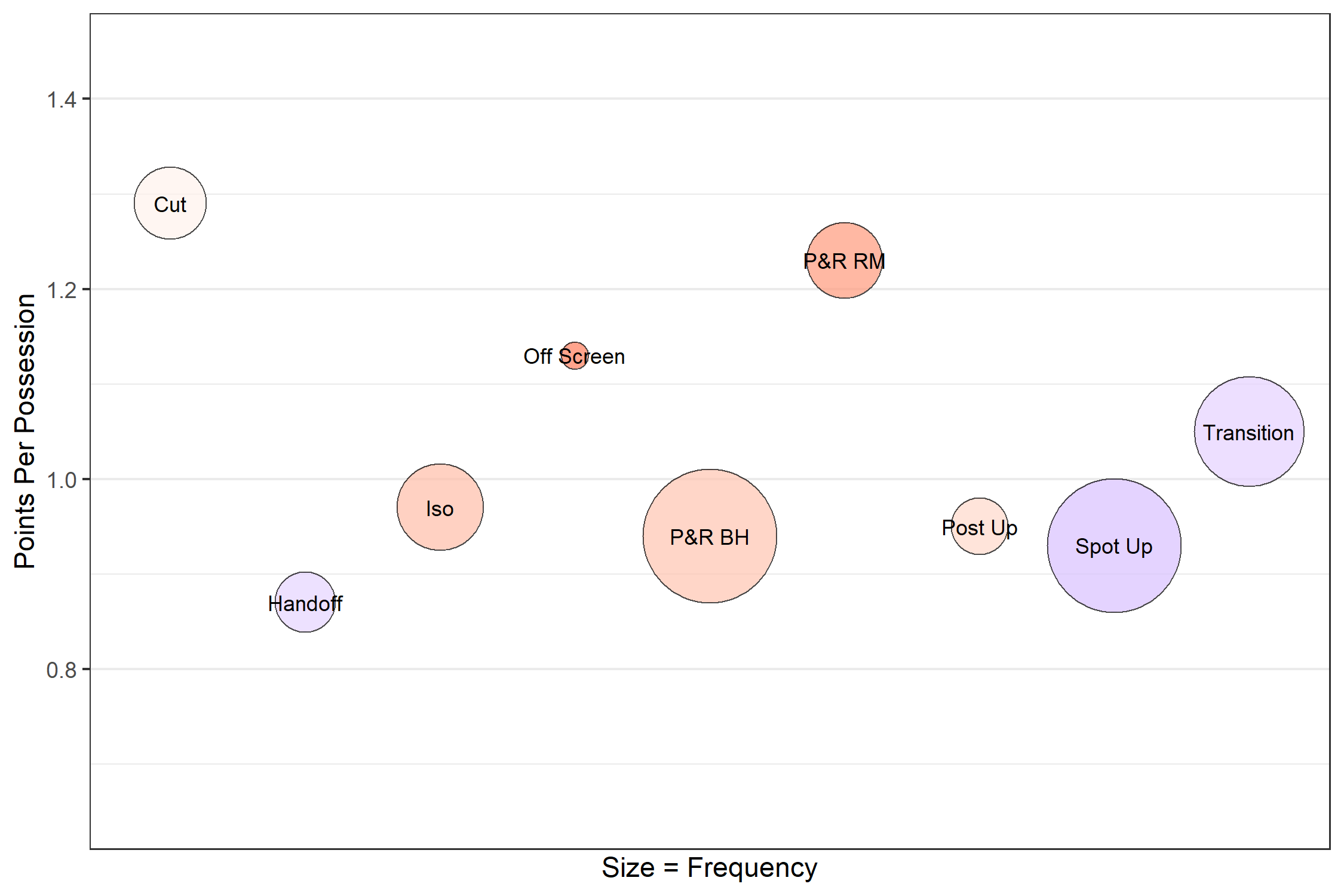 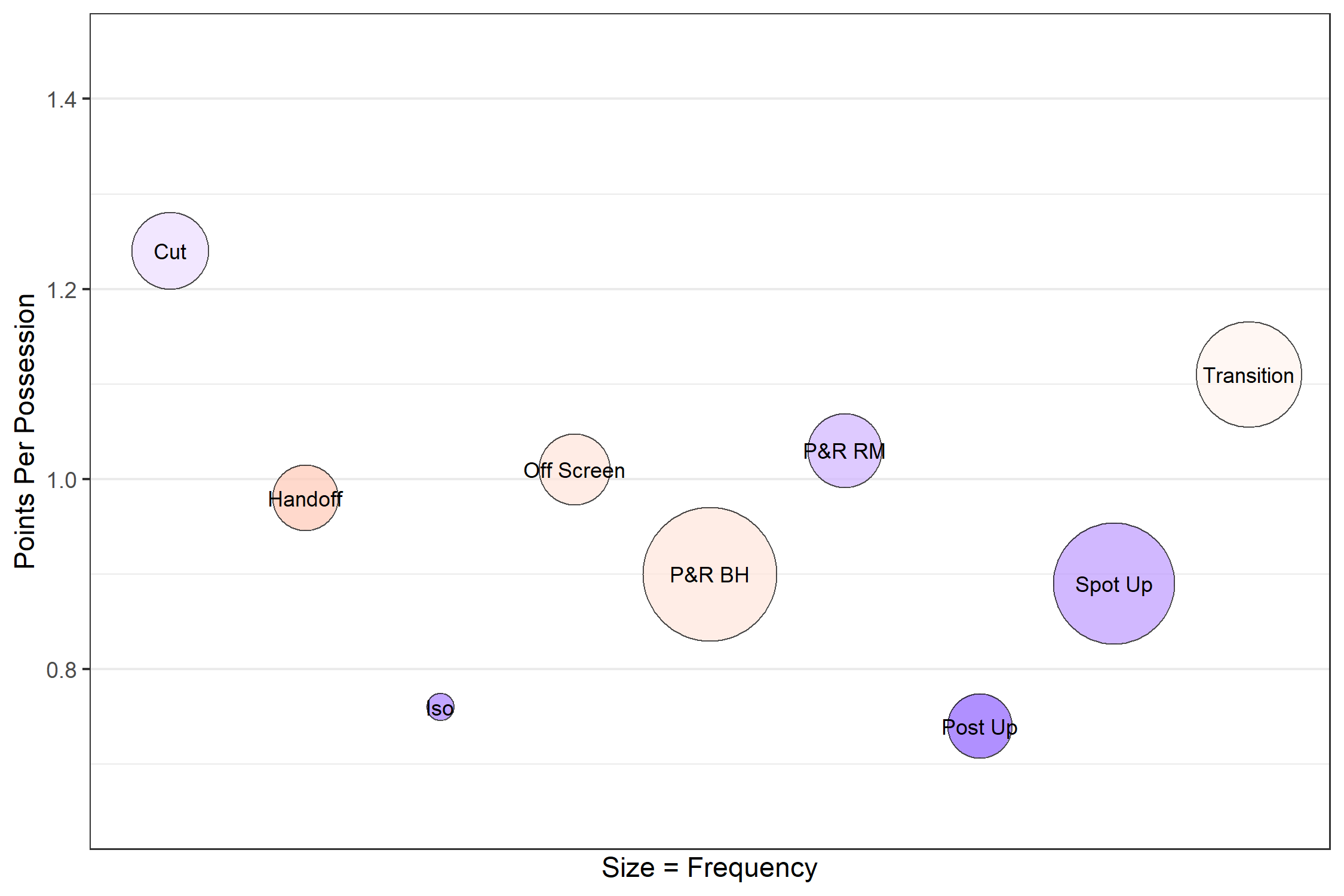 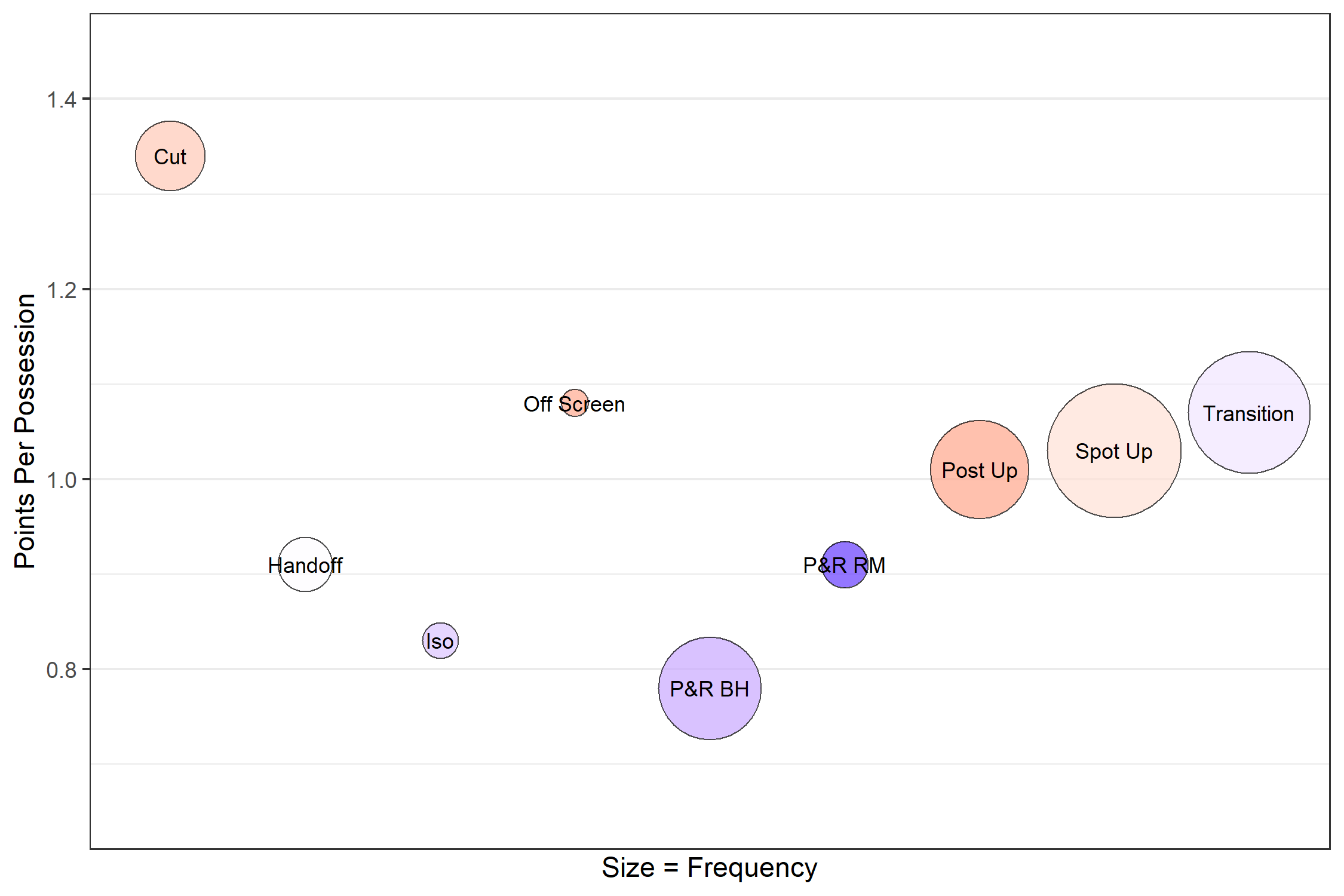 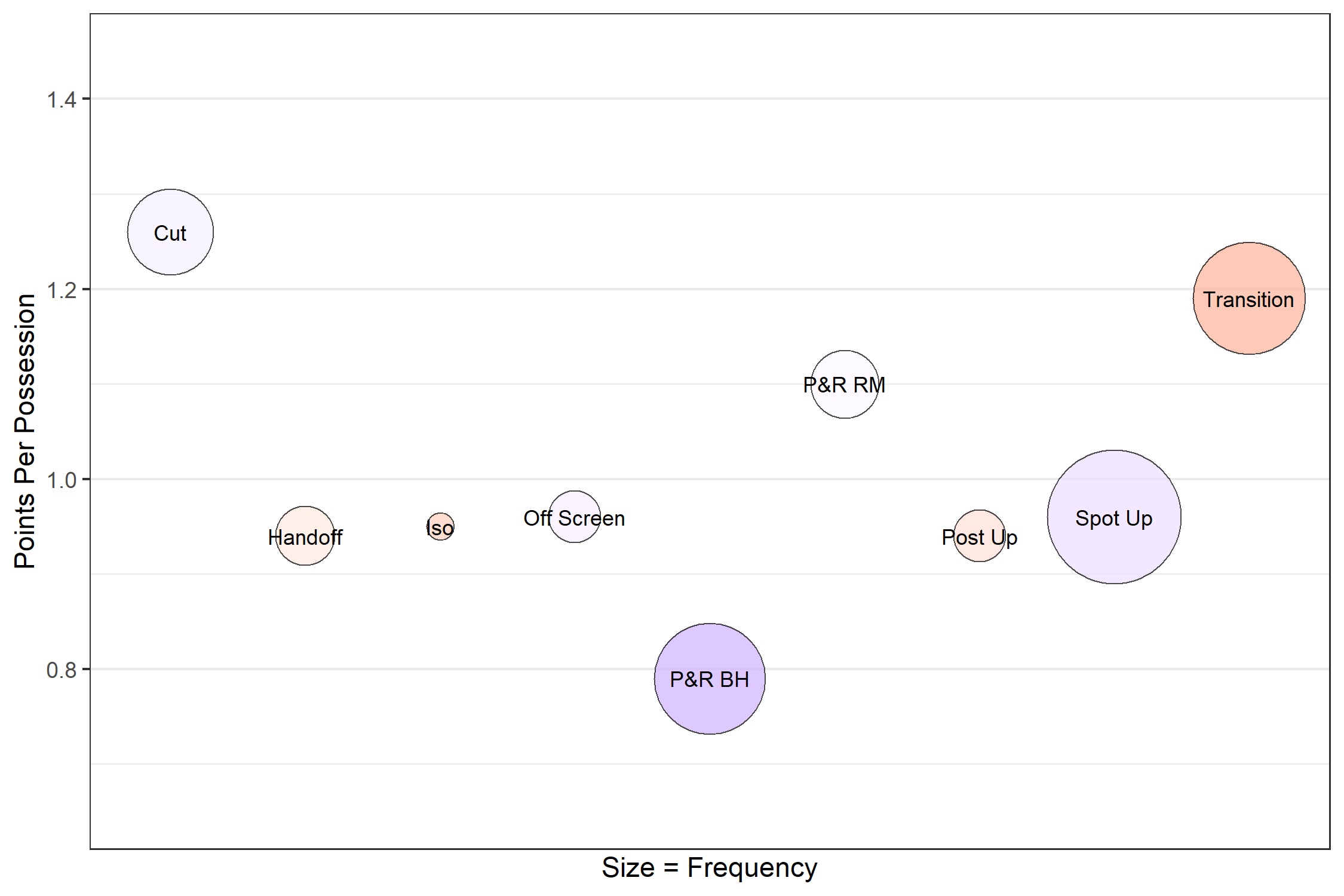 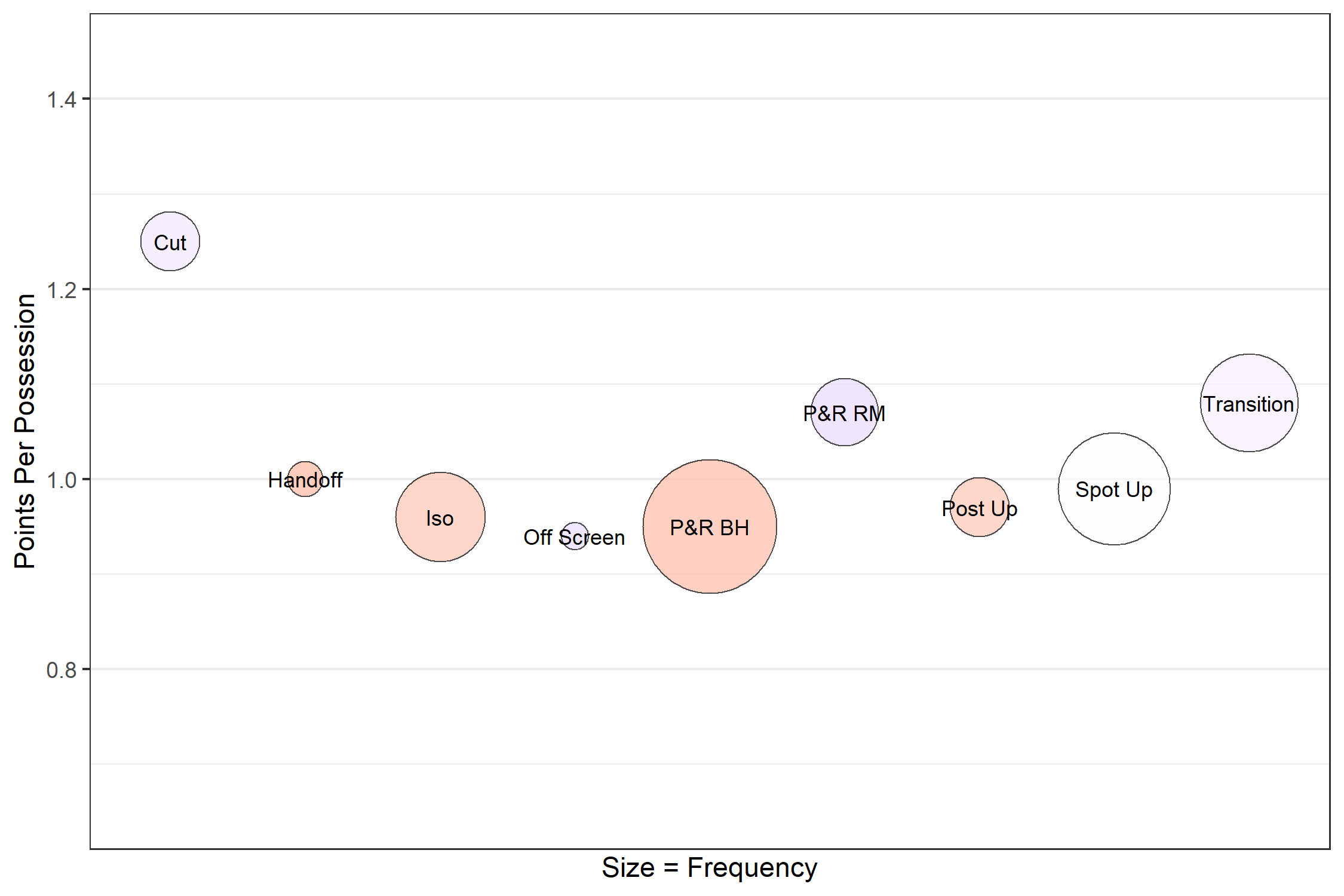 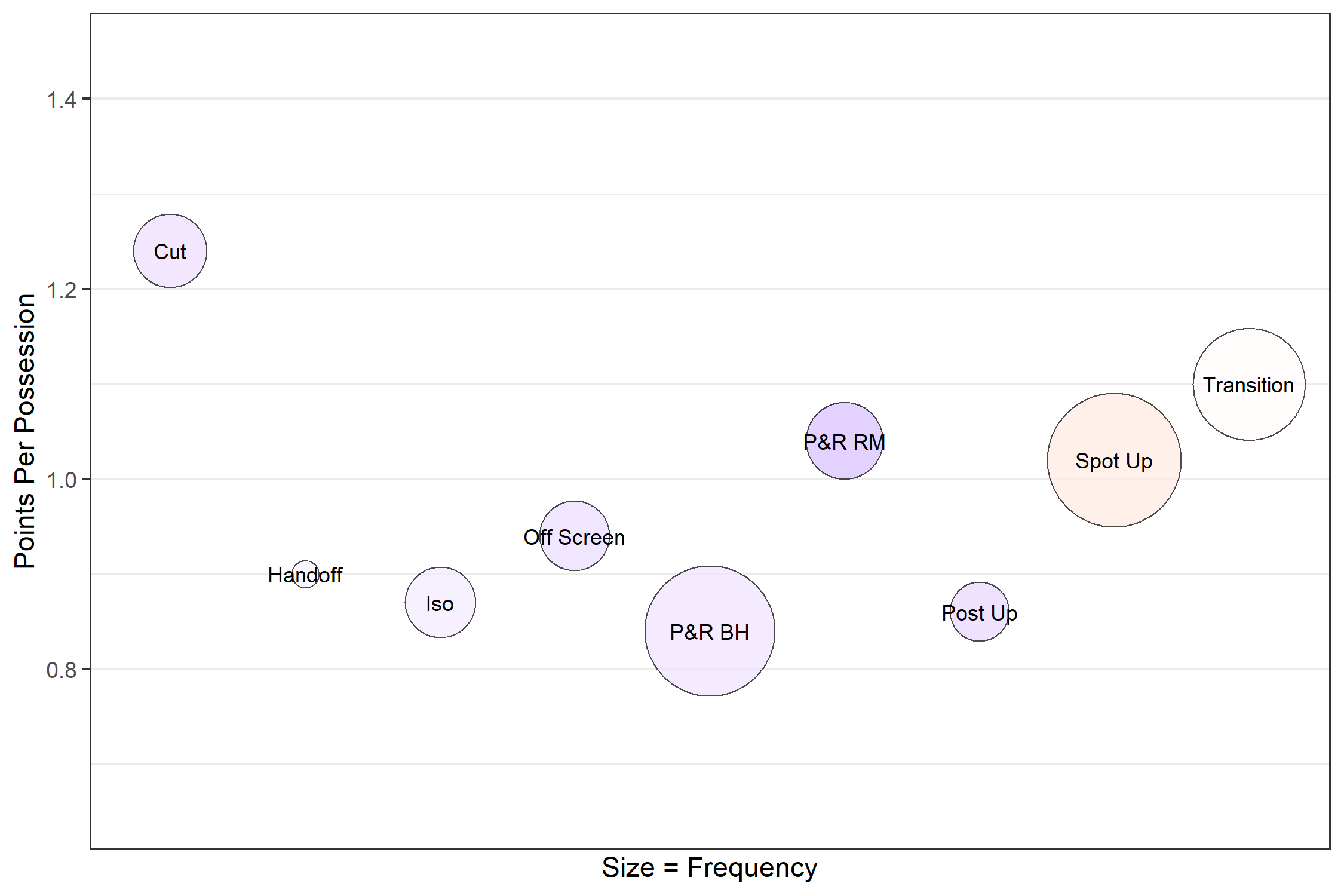 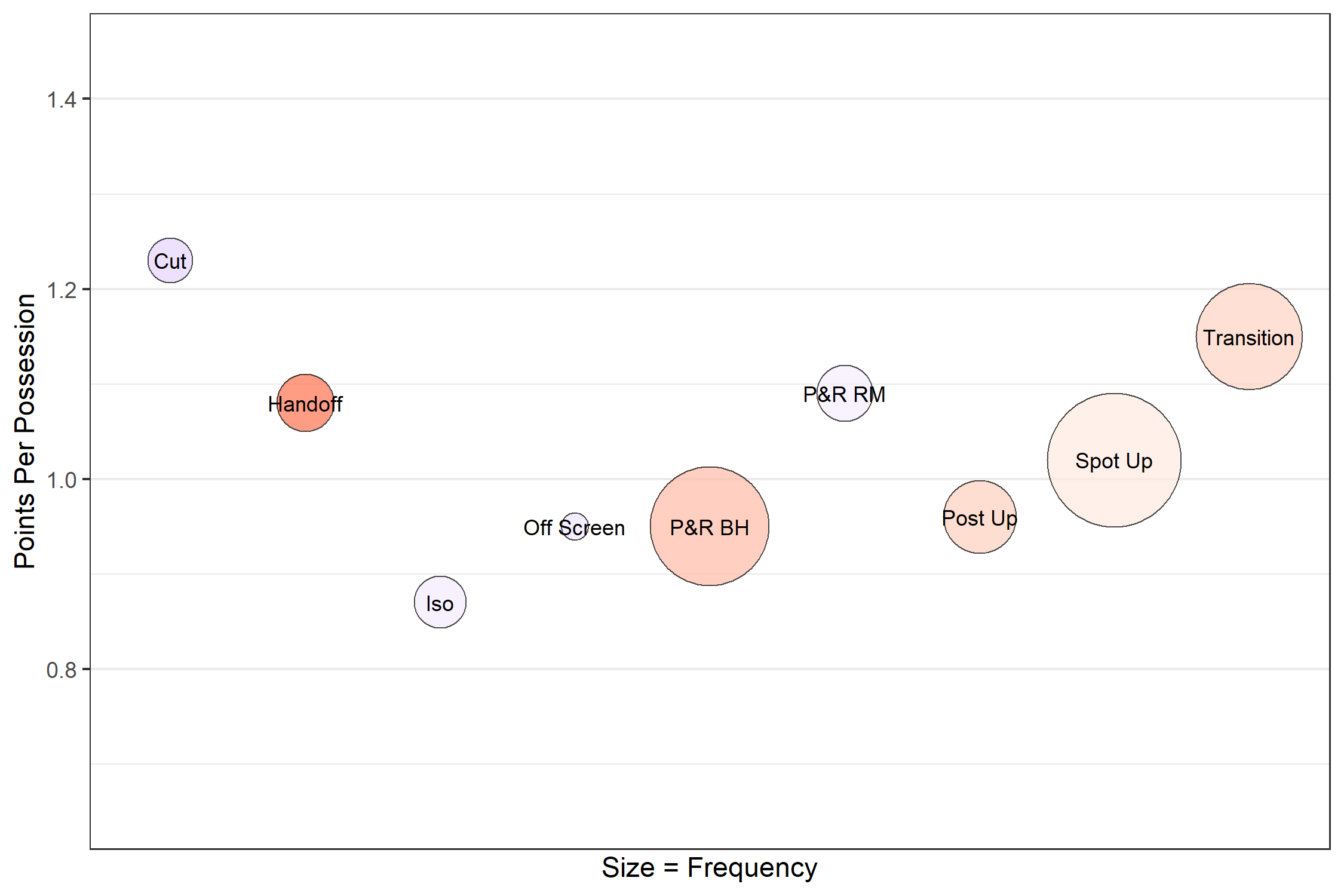 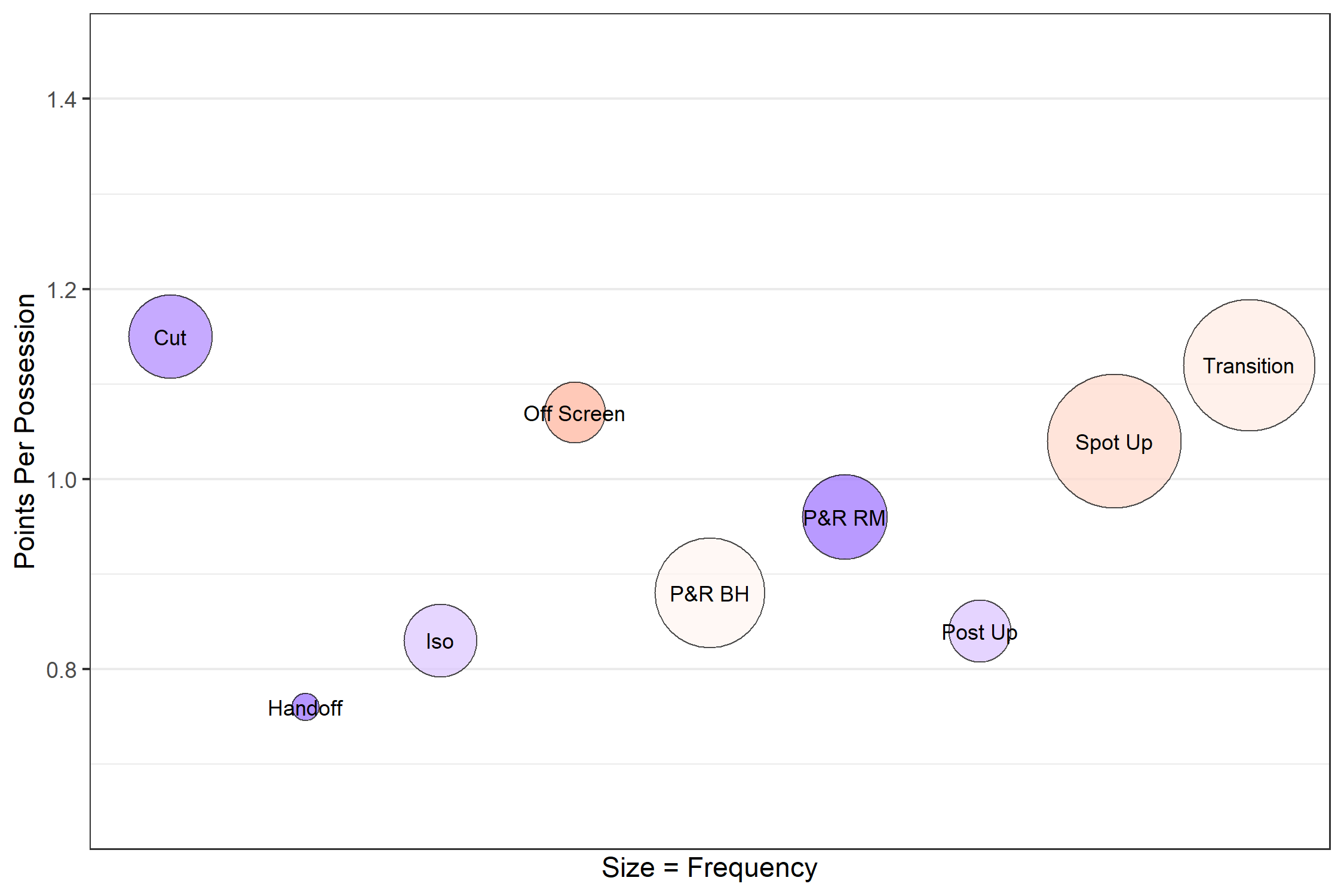 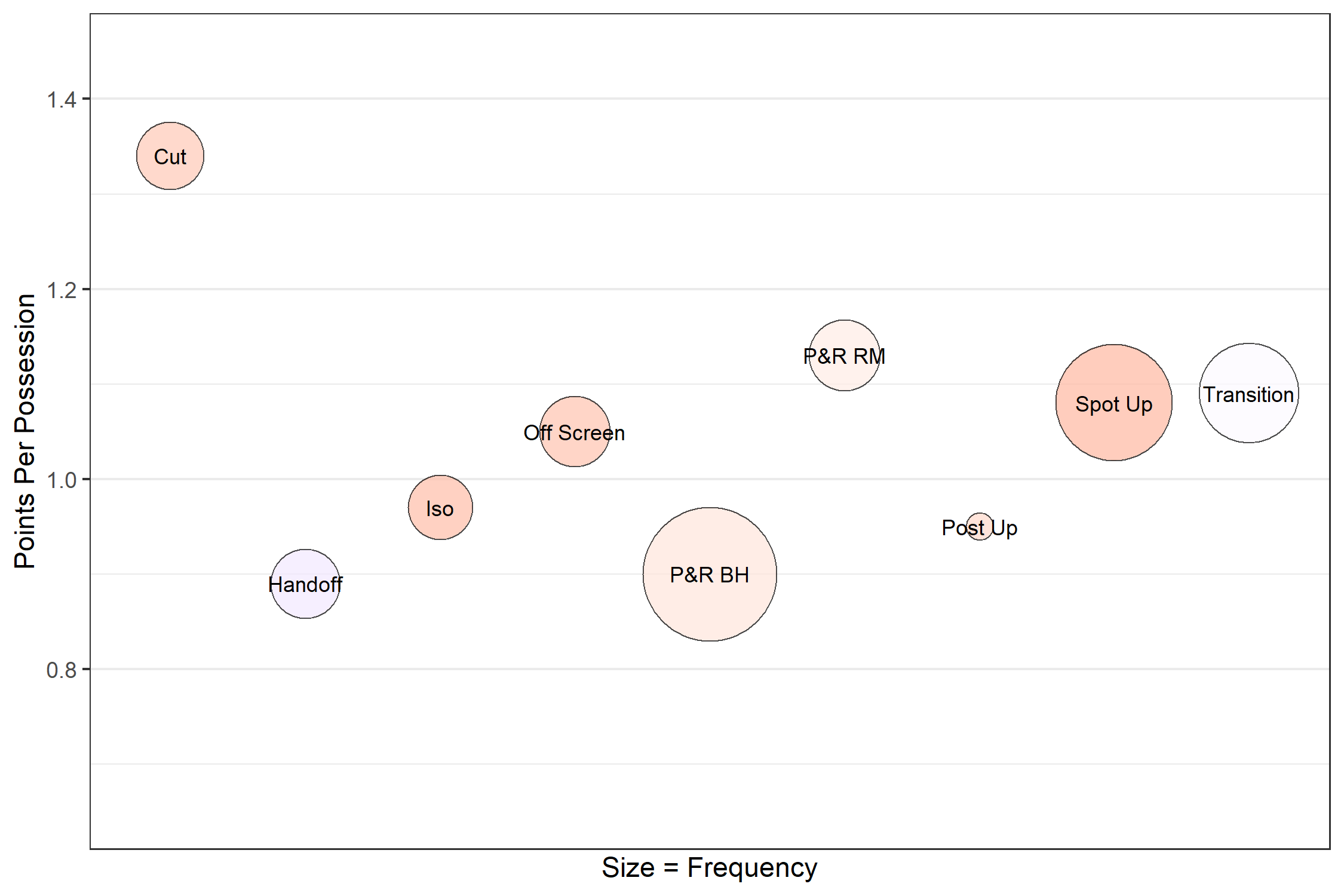 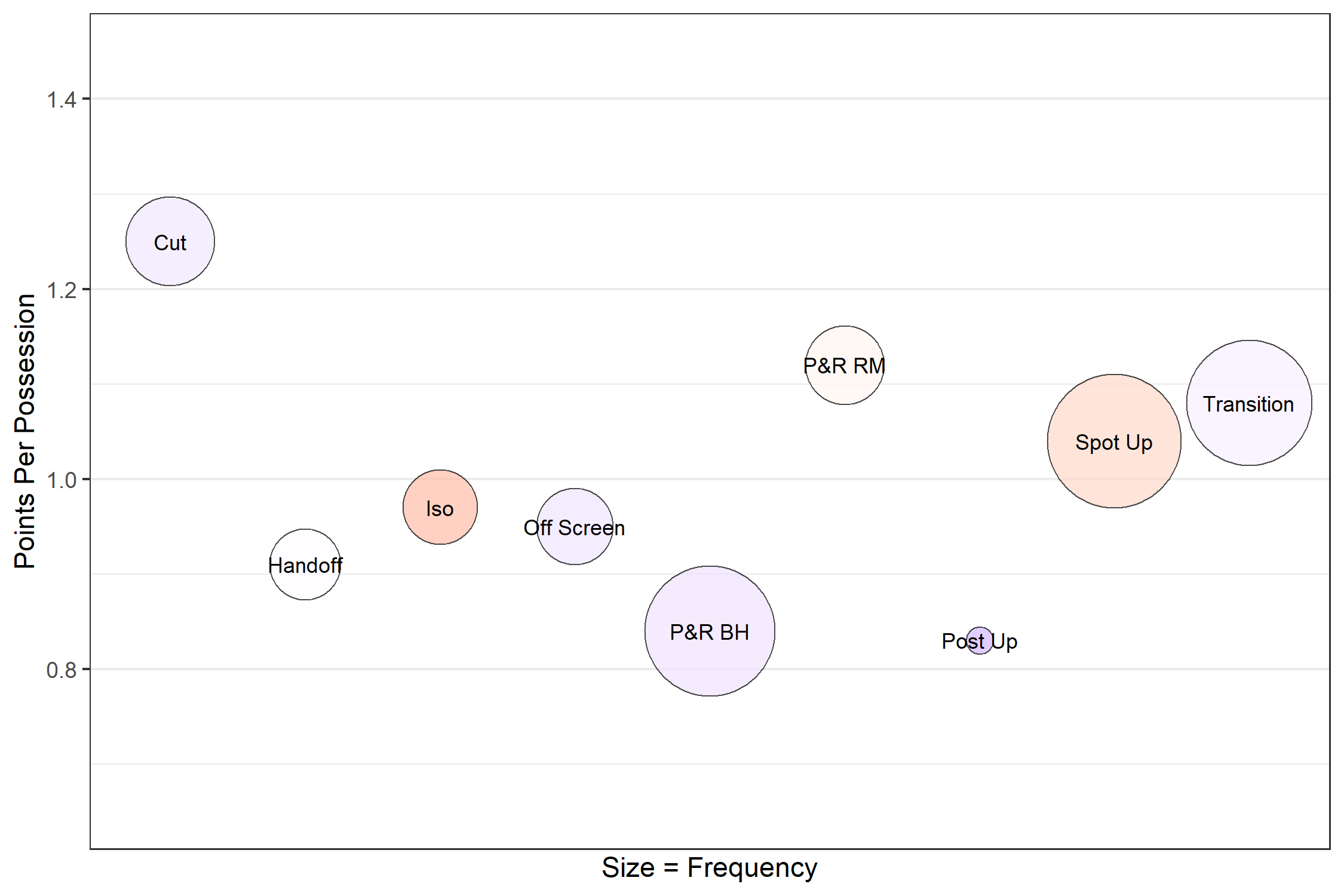 My Talent Maximization Score measures how positive or negative the relationship is between how frequently a team uses each play-type relative to league average and their performance for that play-type relative to league average. If a team uses plays that they’re better at than the rest of the league more frequently than the average team does, they score highly here.

If the same team (No. 1 isolation PPP, No. 30 post-up PPP) were instead 30th in isolation frequency and first in post-up frequency, they would score poorly here.

My Offensive Coaching Score takes the average of each team’s percentiles in Playtype Efficiency and Talent Maximization and transforms them into one overall score.

This is not intended to be the sole barometer of how well NBA offenses are coached. Surely the Magic are not the third-best-coached offense, nor are the Heat 24th. Instead, this metric gives us an idea of:

A) How optimally each offense is run (are more successful play-types used more frequently?)

In other words, Offensive Coaching Score tells us how ideally offenses are being run to capacity both in the “use the best plays the most” sense and the “we’re league-best at isolations so let’s run a lot of isolations” sense.

Again, it would be unfair to claim the Heat offense is poorly coached. Instead, it might be more accurate to say they could stand to decrease the frequency of possessions finished by the pick-and-roll ball-handler, their worst play-type and yet the play they use most often.

A team might also score low for strategic reasons. For example, an offense might not do well in the pick-and-roll but run it frequently to give a bright young point guard more experience running the play. Not everything is about the present.

These and many other factors might explain why a team would score poorly here and yet be coached well, or vice versa. So much goes into coaching. These graphs and rankings are meant only to be part of the puzzle.