Thanks to a wild summer featuring a slew of superstars switching teams, the NBA is a very different place than it was just one year ago. Just ask the Las Vegas sportsbooks.

Last season, the top of the futures board included an odds-on favorite in the Golden State Warriors, plus outside contenders in the Boston Celtics and Houston Rockets. But all of those teams have tumbled down the board, and the top of the list now includes the two teams from Los Angeles and the Milwaukee Bucks.

Not only are the teams at the top all different, but this is the first year since 2015-16 without an established odds-on favorite.

In other words, the Warriors have released their death grip on the NBA.

Consider this trio of facts:

The Toronto Raptors entered 2018-19 at +1,400 but still walked away with the title. Heading into this season, seven contenders boast odds at least that strong. (Apologies to the Denver Nuggets, Portland Trail Blazers and teams that just missed the cut.)

Who are they and what are their big questions? Let’s start at the top.

There’s no question the Lakers have the star power needed to win a title, but even if LeBron James and Anthony Davis have monster seasons, the real questions are about the supporting cast and the team’s overall ability to play defense and make 3-point shots.

As the Raptors just demonstrated, championship rosters are filled with complementary pieces that thrive alongside the superstars. The good news is that the Lakers landed a great one in Danny Green, who not only provides the Lakers with great wing defense but also represents a huge addition to their shooting arsenal. 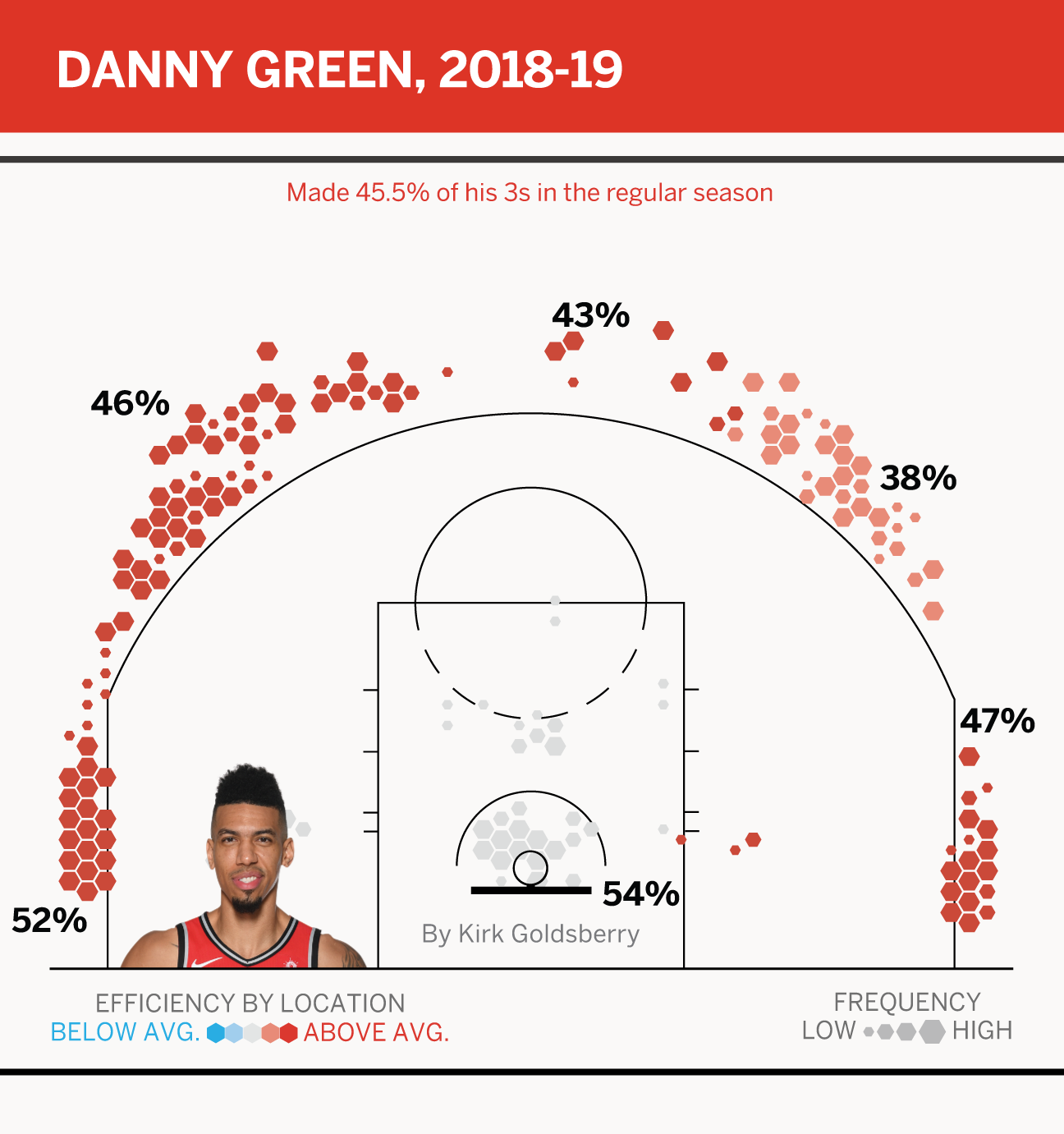 Green should be a near perfect fit next to James. Last season, Green made almost 46% of his 3s in Toronto and more than 91% of his 3s were assisted. Nobody has created more 3-point assists this decade than James, who is especially adept at creating clean looks in the corners, where Green is particularly nasty.

That said, it’s still fair to question the rest of the Lakers supporting cast. Can DeMarcus Cousins regain some semblance of his athleticism? Can Avery Bradley rediscover his jumper? Will Kyle Kuzma‘s new shooting stroke work?

If the answers to those questions are yes, the Lakers will be ferocious. If not, AD and LeBron can only take this roster so far.

No team in the league had a better offseason than the Clippers, adding two incredible two-way superstars to an already solid group. The case for the Clippers is easy: They have the reigning finals MVP in Kawhi Leonard, Paul George, a great coach and some decent role players. If it all clicks, they could replace the Warriors as the best two-way squad in the Western Conference.

The big concern is that it won’t. The frontcourt looks particularly questionable. Can JaMychal Green, Ivica Zubac and Montrezl Harrell really be rotation bigs on a championship team? Bigs may be less important than ever in the NBA, but that doesn’t mean they’re irrelevant, and looking across the group of Western contenders, you don’t see many other frontcourts this weak. You see Anthony Davis, Clint Capela, Draymond Green, Rudy Gobert and Nikola Jokic.

The Bucks deserve to be the favorites in the East, and they arguably have the easiest path to the Finals of any team in the league. In Mike Budenholzer’s first year, they quickly became the analytics darling of the NBA — not only did they hoist up a ton of 3s, but they also led the NBA in net rating. Milwaukee was the only regular-season team that notched both a top-five offense and a top-five defense in the regular season. If there was a regular-season championship, they would’ve won it. But when it mattered most, Giannis Antetokounmpo and the Bucks sputtered against Kawhi Leonard and the Raptors.

Still, there’s room for optimism. Leonard is out West now, the Celtics are weaker and Antetokounmpo is still only 24 years old. Losing Malcolm Brogdon hurts, but the acquisition of Wesley Matthews and Robin Lopez helps.

The key question in Milwaukee is how will this team match up against the new-look Sixers? The Raptors solved the Bucks in part because they figured out ways to keep Giannis away from the rim. Well, this Philly frontcourt featuring Al Horford and Joel Embiid seems tailor-made to do the same.

Despite all the drama surrounding the blockbuster Chris Paul trade, the Rockets still deserve to be slotted as a contender. After all, they now boast two of the last three MVP winners in their backcourt. Still, it’s fair to question just how well the reunion of Russell Westbrook and James Harden will actually work. In some respects, Westbrook represents everything that Daryl Morey’s Rockets hate: poor shot selection and poor scoring efficiency.

The skeptics are quick to point out that there’s only one basketball, and Westbrook and Harden are two of the most ball-dominant players of our era. But if this refrain sounds familiar, it’s because many of those same skeptics raised a similar concern when Houston acquired Chris Paul two years ago. Morey, Mike D’Antoni and Harden made that work, so why can’t they repeat their success?

Paul and Westbrook are wildly different players. Paul is a great shooter, and Westbrook, well, just look at this: 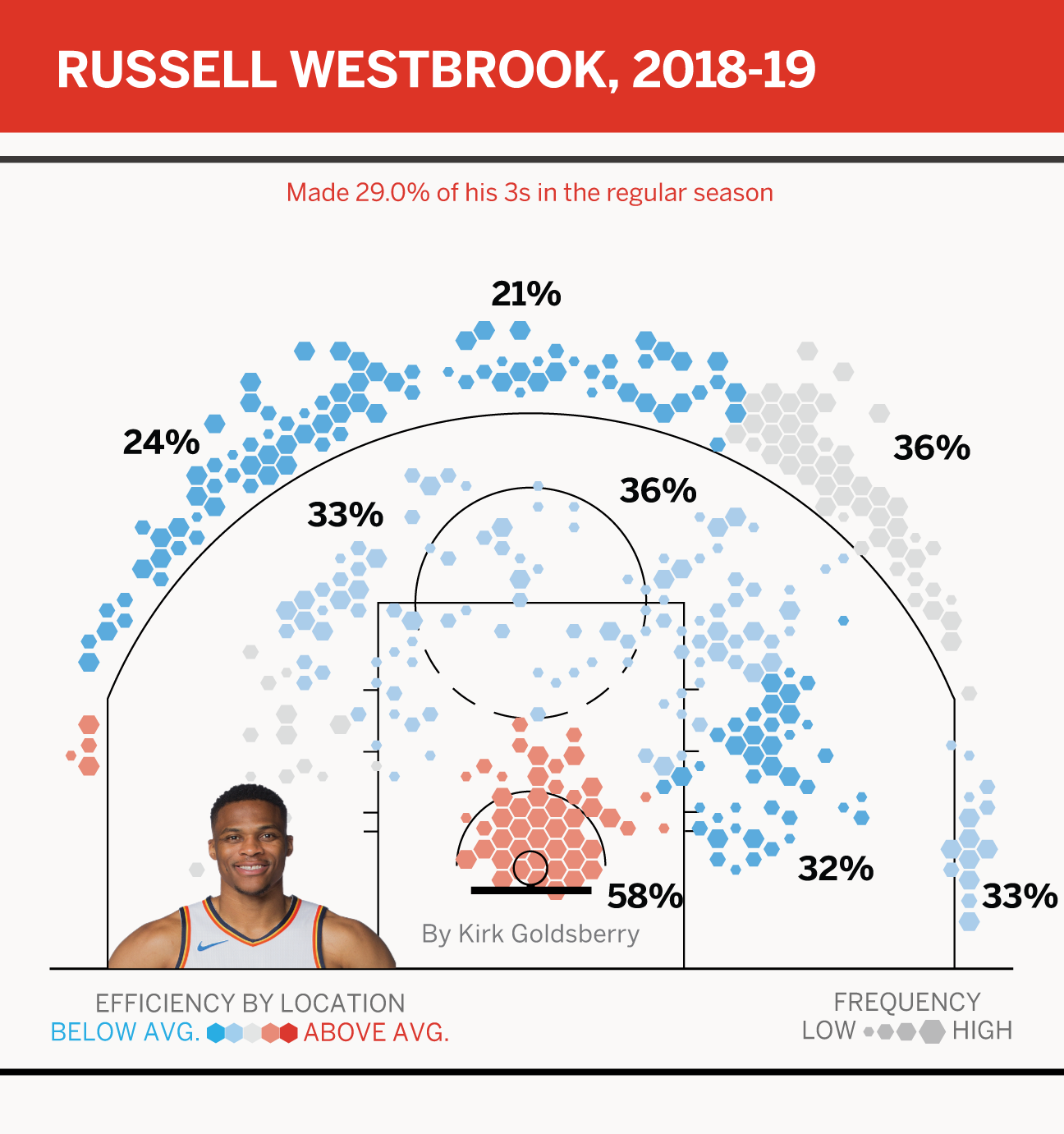 Perhaps nobody in the NBA blends volume and inefficiency as much as Westbrook. Among the most fascinating subplots in this upcoming season will be watching Westbrook attempt to assimilate in an offensive environment built upon analytical correctness. Westbrook is a lot of things, but analytically correct has never been one of them.

But the Rockets deserve some benefit of the doubt. After all, this is the organization that turned Josh Smith into a respectable rotation piece in the 2015 playoffs. That’s some Copperfield stuff.

Speaking of shooting issues, Ben Simmons and the Sixers come into the season as the biggest threats to the Bucks in the East. If it all clicks in Philly, they’re going to be an incredible defensive squad, with Simmons and Josh Richardson patrolling the perimeter while Embiid and Horford protect the paint.

The questions will be on the other side of the floor. Can the Sixers score? Of course. Can they score efficiently and can they shoot 3s? Those are the real questions.

Last season, Philly ranked 19th in the NBA by sinking just 10.8 3s per game. Even if Richardson can replace most of JJ Redick’s perimeter production, it’s very hard to see how this squad becomes even an average 3-point-shooting team. Without adequate floor spacing, Philly’s opponents will be better able to pack the paint to slow down the interior scoring of Embiid, Simmons and Horford.

The 76ers will only go as far as their offensive efficiency and 3-point productivity take them.

The Dark Horses (AKA the next Raptors)

I’m not a betting man, but if I were, I’d be all over this bet. Why? Call me crazy, but if Klay Thompson returns to action by March or April, and the Warriors are in the playoffs, they’re terrifying. They still feature the best backcourt in the league, contract-year Draymond Green and a pretty good head coach. In a league teeming with unproven contenders, I’ll ride with these guys when it matters, assuming they’re healthy.

The X factor in San Francisco will be the new guy, D’Angelo Russell, who provides the Warriors with yet another talented guard who can create shots for himself and others. He averaged 21 points and 7 assists per game last year in Brooklyn, but can he take another leap? Why not? Kerr has a knack for turning promising guards into superstars. When he first coached Curry and Thompson, those fellas were 26 and 24, respectively. Russell is still 23. 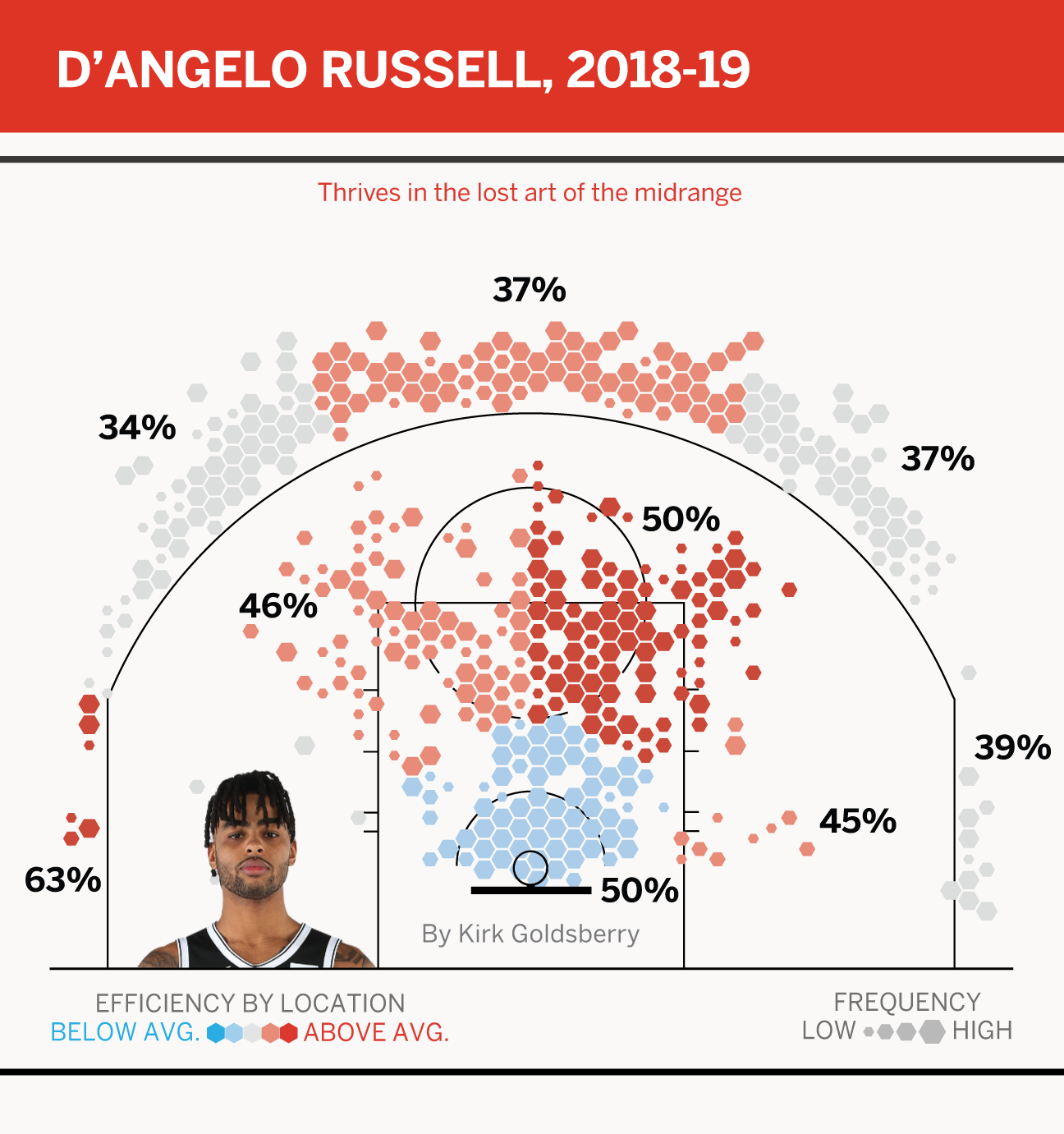 The limiting factors are depth and defense. Even with the loss of Durant, it’s hard to imagine Golden State not logging solid offensive markers. Stephen Curry will be the centerpiece of their offense, and he’s still one of the scariest offensive players in the league.

The challenge will be on the other side of the court. Can this team get stops without Durant, Iguodala and Thompson? Doubtful.

You know who’s not going to have trouble getting stops? The 2019-20 Utah Jazz, that’s who. Thanks to Rudy Gobert, their defense has become one of the most dependable groups in the league, and if Mike Conley can stay healthy, this is a team that now includes a phenomenal defensive point guard, too.

Utah’s issues have always been on offense. Last year, they had the second-best defense in the league but just the 14th-best offense. Conley also helps with that. Oh, and so does the acquisition of Bojan Bogdanovic, who is simply one of the most reliable 3-point shooters in the NBA.

Folks, Bojan can shoot the lights out pic.twitter.com/rrFzzr1hhl

Utah needs Donovan Mitchell to take another step forward in his development, and it needs to find ways to create clean looks for Bogdanovic. That will make this offense much better than last year’s. While this roster may not include any huge superstars, it’s chock full of two-way talents intent on crashing the top of the West.

Following an unprecedented torrent of player movement this summer, the NBA is entering a new world of parity. Just 12 months ago, the Warriors had won their second-straight title and looked poised to win for years to come. Man, that seems like light-years ago. Heading into next season, the Dubs are now just another contender in a very crowded field. The only safe bet is on chaos.