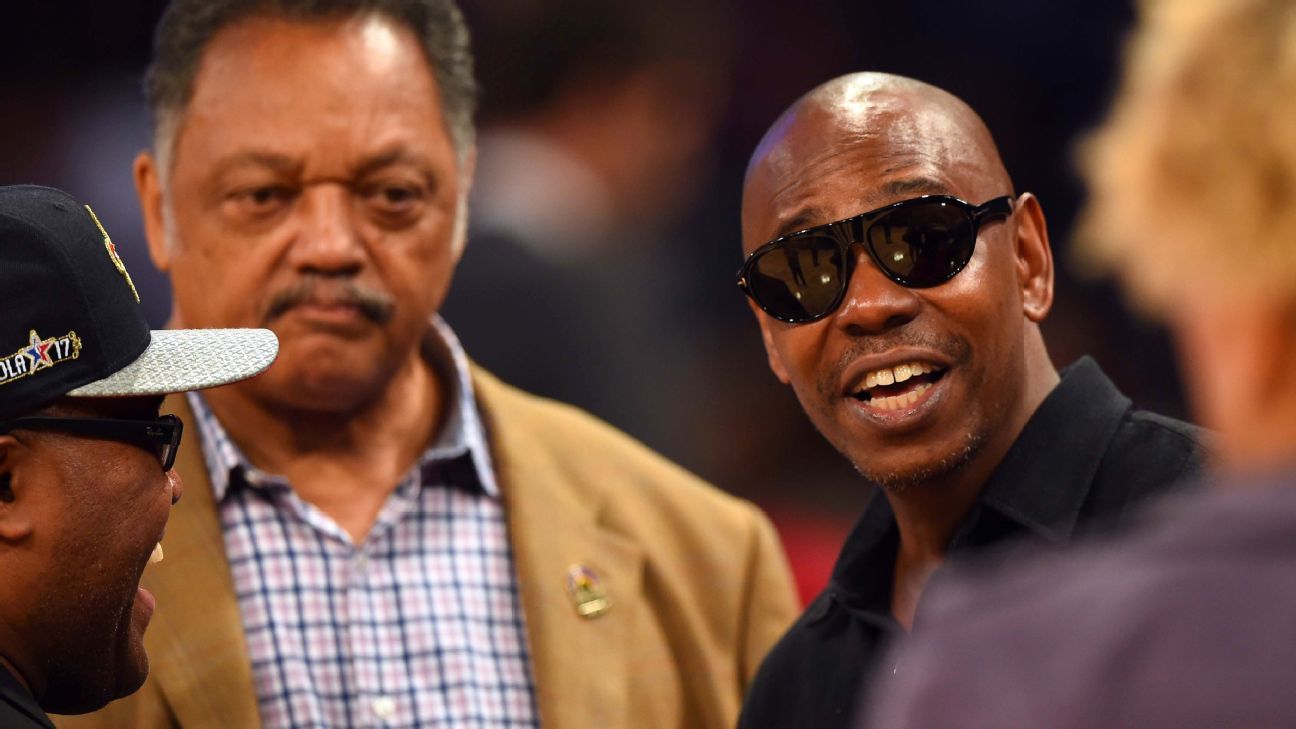 EL SEGUNDO, Calif. — The doors to the Los Angeles Lakers‘ practice court swung open Monday and as reporters trickled into the gym, a team spokesman joked that “our new free agent” was at the far basket, getting up shots.

Dave Chappelle, welcome to the Lakers.

The comedian and actor, whose recent Netflix stand-up special “Sticks and Stones” caused a stir and whose body of work earned him the Mark Twain Prize for American Humor earlier this month, was the latest guest speaker in Lakers general manager Rob Pelinka’s “Genius Talks” series.

“He’s great,” said Lakers coach Frank Vogel. “That guy’s incredible. He really is. Our whole mindset with the genius series is to just get people that are the best at what they do. He’s the best of all time at standup comedy and his parts in acting and everything. We just like to get a peek, get a glimpse into what it took to become the best for those guys. He had some great messages for our guys.”

And the guys had messages for him, too. After Chappelle addressed the team, he took to the court wearing a black-and-white flannel shirt with the sleeves cut off as Lakers guard Quinn Cooks offered tips on the mechanics of the step-back jump shot.

It was also a chance for Chappelle to enter into LeBron James‘ work space the way James once entered his when the basketball superstar took the stage at a comedy event with Chappelle that James arranged for him and his teammates when he played for the Cleveland Cavaliers.

“LeBron made a good point that not only is (Chappelle) funny and makes people laugh, but he informs you a lot of what’s going on in the world,” said Lakers guard Danny Green. “His life experiences have made him or changed him, and it helps us grow as people. African Americans have been in his position before. So he sees a lot of us in himself, and passed on some really good knowledge today, some things to take home with us to think about.”

Lakers forward Kyle Kuzma said that Chappelle couldn’t help but be hysterical, even though the tone of his talk was meant to be inspirational.

“He’s just a funny person,” said Kuzma. “I think [he] may have tried to be serious but he ended up just kind of being funny because that’s who he is. Just telling us what he thought about life and how to be happy.”

Chappelle joins a list of past luminaries like Denzel Washington, Kendrick Lamar and Dwayne “The Rock” Johnson to address the team in recent years and is the second “Genius Talk” speaker this season, following magician David Blaine.

While the team couldn’t agree on their favorite bit from Chappelle’s career — Vogel mentioned his role as the blustery comic Reggie Warrington in the feature film “The Nutty Professor,” while Kuzma pointed to an R. Kelly skit from “The Chappelle Show” on Comedy Central — there was universal reverence for Chappelle’s appearance.

“It is cool,” said Vogel, who had a brush with another famous comic named Dave when he was a guest on “The Late Show with David Letterman” as a kid; showing off his ability to spin a basketball on a toothbrush while brushing his teeth.

“I wouldn’t say I get starstruck but it’s definitely cool to see somebody you admire and have been entertained by. It’s neat and great for all of us. Coaches, players, something we really enjoy.”

From celebrities sitting courtside at games to celebrities speaking to the team to break up the monotony of practice, the Laker experience is clearly unlike any other team in the league.

“It’s one of a kind and it’s definitely a Laker perk,” said Kuzma. Vogel recalled flying out to L.A. for his introductory press conference and sitting next to the actress Lea Thompson, who played Marty McFly’s mom in “Back to the Future” on the flight.

“She and her husband are both Lakers fans and obviously ‘Back to the Future’ is iconic,” Vogel said. “It was really neat for both of us and that’s probably the best example for me of Hollywood and basketball intertwining.”

And Green, an 11-year veteran playing for his fourth franchise, can appreciate how special it is.

“Definitely multiplied, magnified times 10 from anywhere else I’ve been,” he said. “How many fans and celebrities on the road cheering, it feels like America’s team everywhere we go. But also all the types of celebs I got to grow up watching and still a fan of, sitting courtside and want to be friends and say hello and speak. It’s kind of crazy and surreal.”

The Whiteboard: What a second NBA bubble means for each team in the ‘Delete Eight’
Don’t forget LeBron’s astounding on-court legacy in Miami
What people in the NBA are saying about the Orlando restart
DeAndre Jordan has COVID, won’t be at NBA resume
NBA Daily: The Return – 6 Situations – Atlantic Division