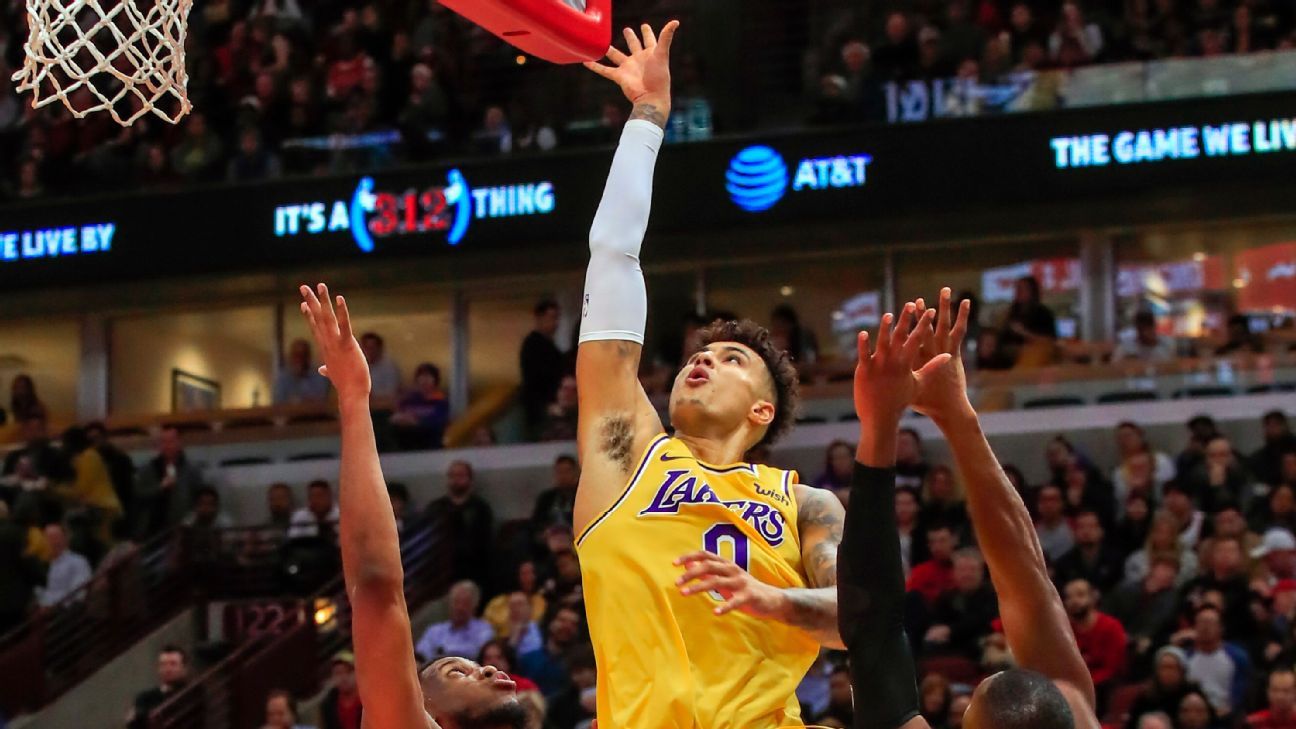 CHICAGO — With LeBron James catching his breath after playing nearly the entire third quarter and Anthony Davis sitting on the bench right beside him, saddled with four fouls, the Los Angeles Lakers relied on an unlikely lineup to key a fourth-quarter comeback against the Chicago Bulls.

When Kyle Kuzma, Quinn Cook, Alex Caruso, Dwight Howard and Troy Daniels stepped onto the court to begin the fourth Tuesday, L.A. trailed by 13. Three minutes and 48 seconds of game time later, the Lakers led by 3, using the 16-0 surge to guide them to a 118-112 win, their sixth victory in a row.

“That’s the Kuz we know,” James said of the Lakers’ third-year forward who pumped in 11 of his 15 points in the final frame.

Kuzma was playing in just his third game this season after being sidelined for nearly three months with a stress reaction in his left ankle suffered during USA Basketball training camp.

He sprung to life Tuesday night by making a 3 on the Lakers’ first possession of the fourth.

Up to that point, he was 1-for-13 from 3 on the season. He finished the fourth quarter making five of his eight shots in the period.

“Just confidence,” Kuzma said. “Anytime, at least for me, shots go in, I get more and more confidence, and I feel like that’s kind of the gist of what happened tonight.”

In Kuzma’s first two games back, he totaled just 14 points on 5-for-15 shooting. The first half was going in the same direction for him, as he shot 1-for-6 from the field with three turnovers, before he finally found his footing.

“He was kind of rushing a little bit and had some turnovers and just was playing a little fast,” James said. “The one thing for him, he can’t try to just get it all the way back in the first couple games. I think it will slowly continue to get back. …

“Kuz is going to be a great piece for our team. He showed that tonight, why. Offensively and defensively he was just so in tune and everybody else that was on the floor as well.”

The loss dropped the Bulls to 2-6.

Bulls coach Jim Boylen, who elected not to call timeout during the 16-0 run, took responsibility for the fourth-quarter collapse.

“I’ve got to do a better job of getting guys to understand winning basketball, and they’re a young group, so that’s what I’ve got to do,” Boylen said.

As well as Kuzma played, Cook, Howard and Caruso were right there with him in importance during the comeback. Cook scored eight of his 17 points in the fourth, including the go-ahead 3 with 8:53 remaining to give L.A. back the edge. Howard put up six points, five rebounds and a blocked shot, and Caruso had four points and two steals.

“Anytime our bench comes in and does great things, I want to be the first one off the bench cheering those guys on right on the court, jumping up and down, because it gives them confidence as well,” said Davis, who admitted that James, DeMarcus Cousins and Kentavious Caldwell-Pope kept him encouraged when his Chicago homecoming got off to such a rocky start with him shooting just 2-for-9 in the first half. “So we’re one big team. No matter who is on the floor, we got to have guys come in and play and we should be able to throw anybody in the fire and we did that tonight. Plenty of guys stepped up.”

It was such a group effort that James’ brilliance was overshadowed. The 17-year veteran finished with 30 points, 11 assists and 10 rebounds to tie his personal best mark of three straight triple-doubles, becoming the first Laker to accomplish the feat since Magic Johnson in 1987.

“Washed King,” Davis said to James, teasingly after the game.

Then Davis broke out a falsetto voice: “I’m LeBron James, and I can’t do anything anymore except record triple-doubles.”

The triple-doubles coincided with a 3-0 road trip for the Lakers, who will return to L.A. with the best record in the league.

“It comes with team success for me,” James said. “Triple-double means absolutely nothing to me if it’s not in a win. This is three wins for us, and I feel pretty happy about the way we performed.”

It was a night where he was helped by his teammates just as much as he helped them.

“Those guys came in and gave us a huge push,” James said. “And we needed every minute of it.”

The Whiteboard: Breaking down Bradley Beal to the Nets trade rumors
Sources: NBA teams seek guidance on return
The NBA in a bubble: The blueprint for how the league could finish the 2019-20 season
Dunks, game-winners and a TD pass: Our favorite play of the season for all 30 teams
Giannis unsure of ‘Greek Freak’ roots but loves it